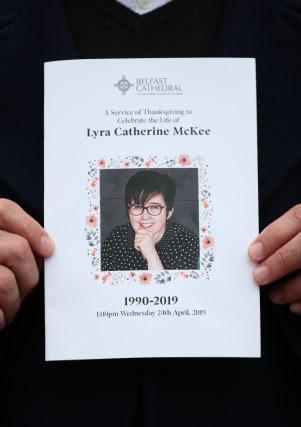 A man accused of possessing the gun used to kill journalist Lyra McKee left DNA traces on the weapon, a court has been told.

Genetic material linked to Niall Sheerin was found on the loading mechanism of the pistol and on the accompanying bullet magazine, a detective constable told a district judge.

Sheerin, 27, from Tyrconnell Street in Londonderry, was granted conditional bail after appearing before Derry Magistrates’ Court via video link on Thursday morning.

Ms McKee, 29, was shot dead by dissident republicans in Derry in April 2019 as she observed rioting in the Creggan area of the city.

The extremist group that styles itself the New IRA was responsible for the killing.

The gun used to kill the author – a Hammerli X-Esse .22 pistol – was found wrapped in bin bags in a hollow behind a telegraph pole in the Ballymagroarty area of Derry last month.

The detective constable, who said he could connect Sheerin to the charges, said police testing has established that the weapon was used to shoot Ms McKee and also shoot four men in the legs in separate paramilitary-style attacks in the city in the months before the killing.

The officer told District Judge Steven Keown that expert analysis of a DNA trace found on the ridge and catches around the loading mechanism was one billion times more likely to belong to Sheerin than anyone else.

He said a trace found on the magazine was 70 million times more likely to belong to the accused than anyone else.

The officer told the court: “It’s not just the fact that his DNA is on the gun, it’s the fact of where his DNA is on the gun which would indicate Niall Sheerin has actively been involved in not only having possession of that gun, not only storing it and hiding it for the New IRA, but actually involved in loading and unloading that gun, preparing it to be used in a shooting or unloading it after for storage.”

The court heard that Sheerin did not respond to questions during seven police interviews following his arrest.

He did issue a prepared statement to officers denying any involvement in Ms McKee’s death, or the four other gun attacks.

In relation to the discovery of the DNA traces, he stated: “I’m at a loss as to how this happened.”

Appearing before court via video link from Musgrave Street police station in Belfast, Sheerin, wearing a Glasgow Celtic football shirt, spoke only briefly at the outset of the hearing to confirm his name, date of birth and that he understood the charges facing him.

The detective constable objected to bail on the grounds Sheerin represented a flight risk, could interfere with witnesses or commit further offences and currently resided at an address within a mile-and-a-half of all five crime scenes.

Defence barrister Joe Brolly argued that bail should be granted, insisting the police had offered “no cogent or reasonable evidence” to support its objections.

“The case is extremely slim,” he said.

Mr Brolly said it was a “very plausible scenario” that the DNA could have got on the gun via secondary transfer.

He highlighted that the man accused of Ms McKee’s murder – 52-year-old Paul McIntyre, from Kinnego Park in Derry – had been granted bail in the High Court last month.

“A co-accused charged with a much more serious offence has been admitted to bail,” said Mr Brolly.

The judge said he could not draw a distinction between Sheerin’s case and that of McIntyre’s in respect of the grounds for granting bail.

He granted bail with a number of conditions, including a £500 surety, a curfew, electronic tagging and a ban on him entering Derry’s city limits.

Mr Brolly said he was “extremely disappointed” at the condition prohibiting his client entering Derry, claiming it would mean he would lose his job in a bookmakers in the city.

“The circumstances are such that he might as well not have been granted bail,” he said.

Sheerin is due to appear before court again on August 13.