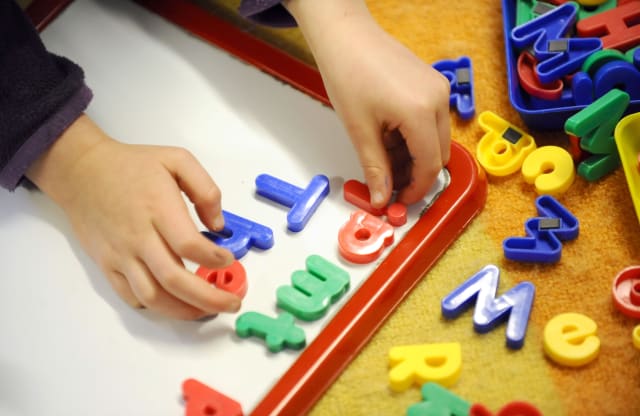 Support for children during the first years of their lives is “disjointed”, meaning many from disadvantaged backgrounds are behind by the time they start formal education, a report has found.

Anne Longfield, the Children’s Commissioner for England, has published a report looking at the provision of early years services for one to five-year-olds across the country.

It found that, last year, 29% of five-year-olds in England were not at the expected level of development by the time they started school, including 45% of children receiving free school meals.

In Middlesbrough, 38% of children are not achieving the expected level of development aged five, while in Dudley and Sandwell, in the West Midlands, it is 35% of children, it said.

It comes amid a recent warning from childcare providers that one in four nurseries and pre-schools fear closure within the year, rising to one in three in the most disadvantaged areas, as a result of the coronavirus lockdown.

The Commissioner’s office analysed data on all children in England who had not met the expected level on half of their early learning goals at the age of five and tracked them through to the end of primary school.

They are also more likely to leave school with no GCSEs, to suffer some form of mental ill health and to be obese.

The Children’s Commissioner has called for an emergency rescue package to prevent thousands of nurseries from going under as a result of Covid-19.

It includes an expanded offer of 30 hours free childcare and early education, a cross-government “Best Beginnings” strategy led by a Cabinet Minister, and a review of early education and childcare funding.

Ms Longfield said: “Each year 82,000 children in England start school significantly behind where they should be at the age of five.

“That is one in seven children, or four children in every classroom.

“This report shows that their life chances can already be undermined at this point, if there is no joined-up system of early support to help them get ready to learn.

“Nurseries and early years support play a vital role in helping children prepare for school, but coronavirus and lockdown have put many at risk of closure.

“The consequences could be thousands of children missing out on vital support that sets them on a path to a good education and better prospects.

“At the same time, any economic recovery will need parents to able to return to work full-time.

“Nursery closures could put a dent in plans to get the economy back on track.

“In the immediate term, we need an emergency Government rescue package to stop nurseries going under, but there is much more to do beyond that.

“The Government must make the early years a priority and drive reforms so that all children start school ready and able to learn and progress.”

A Department for Education spokesman said: “Our fantastic nurseries, childminders and pre-schools provide crucial support for children and families.

“That’s why this Government has always championed the early years sector and why we are continuing to back early years entitlements with £3.6 billion this year.

“Alongside this we have protected early years settings throughout the pandemic with significant financial and business support, including through the Coronavirus Job Retention Scheme.

“We are investing in early years organisations to help them boost disadvantaged children’s development, with grants targeted at improving outcomes for young children at risk of falling behind by age five, and for those with special educational needs.”

“The childcare sector is now on the brink of collapse due to Covid-19, and we know that it is nurseries in deprived areas that are most likely to close,” she said.

“The Government must urgently provide targeted support for the childcare sector to prevent a wave of nursery closures, which would devastate working families and set back our economic recovery.”

Judith Blake, chairwoman of the Local Government Association’s Children and Young People Board, said: “Councils support calls for a review of the early years system and we are pleased the Commissioner is reinforcing our calls for long-term investment in councils’ public health and early intervention services.

“With long-term sustainable funding, councils can ensure that every child has the best possible start in life, protect children’s health and reduce widening health inequalities resulting from Covid-19.

“High-quality early years provision makes a real difference to young children and is proven to break the cycle of disadvantage, improving social mobility and offering them a good start in life.

“Councils and providers have a crucial role to play in supporting young children as we look to recover from Covid-19.

“The current offer does not give parents clarity about the best options for their children and there are growing concerns about the provision for disadvantaged children, those with special needs, and significant challenges facing the workforce.

“Covid-19 has also exacerbated the financial challenges facing early years providers and there remains an urgent need for additional funding to support them.”