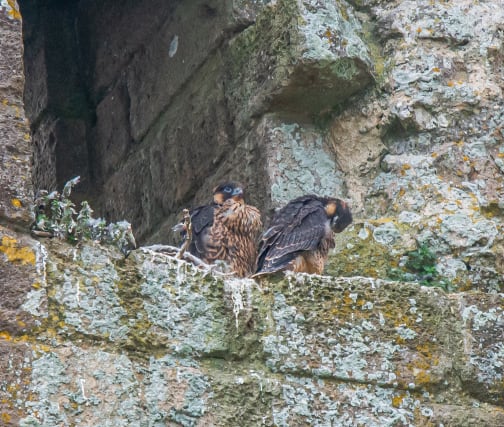 The charity said a pair of the birds of prey which moved into Corfe Castle in Dorset at the start of lockdown and built a nest 70ft (21m) up the on the walls of the 12th century keep have successfully reared three chicks.

Another eight chicks have been discovered at three sites cared for by the Trust in the High Peak Moors in the Peak District, and rangers say one pair may have chosen their nesting spot due to a lack of disturbance during lockdown.

It spells good news for the bird, whose diving flight to catch its prey makes it the fastest animal on Earth.

The UK’s peregrine falcon population declined significantly up to the 1960s and 1970s due to human persecution and the use of toxic pesticides.

While legislation and protection has helped increase the number of breeding pairs to an estimated 1,769 across the UK, Isle of Man and Channel Islands, this is still considered low, especially in the uplands, the Trust said.

At Corfe, the peregrines, who had the castle to themselves as they made a nest and laid eggs, do not seem to be fazed by hundreds of visitors walking past below them now that the heritage site has reopened to the public.

It marks the first time the birds have nested in the ruins of Corfe Castle since the 1980s.

Tom Clarke, nature engagement officer for the National Trust, said: “Despite the peregrines having up to 700 visitors walking past each day after we reopened, the youngsters are doing well and are starting to fledge.

“The peregrines moving in just as we went into lockdown was perfect timing.

“It gave them a quiet castle to make a nest and lay their eggs. By the time we opened, the eggs had hatched and the parents were very unlikely to abandon their nest.”

He said the birds are currently luring their young into the wider world by offering them prey they have caught.

“We’ll never know if the pair of birds would have moved in without lockdown, but we are hoping that this pair will come back next year having discovered an amazing site and learnt to tolerate people being below their nest,” he added.

The latest discovery of a new breeding pair with two chicks, on a rock face in the High Peak Moors, was made by volunteers from the Peak District Raptor Monitoring Group.

It takes the total number of successful pairs on the moors of the National Park to six this year.

“Identifying a new breeding pair along with two healthy chicks is very promising for their future in this area.

“While the location is thankfully remote, it is not where we’d expect to find a nest.

“We think they may have chosen the site partly because of the lack of disturbance earlier in the year during lockdown when wildlife had the place to themselves.”

The Trust urged any visitors who come across the peregrine nest sites to keep their distance to prevent the parents being disturbed and abandoning their chicks.

And it is asking visitors to Corfe Castle and the Peak District to take care of wildlife, by sticking to the paths, not making fires or barbecues, and keeping their dogs on short leads.