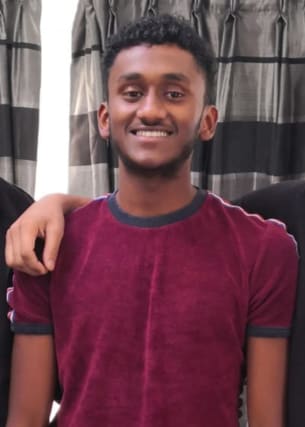 A look across rail tracks sparked the “senseless killing” of a talented athlete on his way to watch football at the Emirates stadium, a court has heard.

On the afternoon of September 24 last year, Tashan Daniel had kissed his father goodbye and set off with a friend to see his beloved Arsenal take on Nottingham Forest in the third round of the Carabao Cup.

Within an hour, his father witnessed efforts to save his 20-year-old son, after he was stabbed in the chest at Hillingdon Station, west London, the Old Bailey heard.

Prosecutor Jonathan Rees QC told jurors it was a “senseless killing” which appeared to have been started by a look across the train tracks.

The knifeman Alex Lanning and Jonathan Camille are on trial at the Old Bailey, accused of his murder.

Jurors heard Mr Daniel was a talented athlete who trained up to four times a week at Hillingdon Athletic Club.

He worked as a photographer and was described as a popular young man who made friends easily and was devoted to his family.

On the morning of the killing, Mr Daniel had undergone physiotherapy, taken his grandfather to a day centre and had lunch with his mother, the court heard.

At about 3.30pm, he kissed his father goodbye and walked to Hillingdon station with his old school friend, Treyone Campbell, who was going to the football with him.

“Within an hour of that kiss, his father was at the station watching medical professionals trying their best to keep his son alive,” Mr Rees said.

He told jurors: “The prosecution say this was a completely senseless killing.

“The two men did not know each other. They were on opposite platforms, each intending to catch a tube travelling in a different direction.

“It seems that the catalyst for the violence that led to the stabbing was that Alex Lanning thought Tashan Daniel was looking at him across the rail tracks.”

He and Camille had changed platforms to confront Mr Daniel and his friend, the court heard.

Mr Rees said: “When the violence erupted, Camille quickly became involved in a fight with Treyone Campbell, and he was still fighting him when Alex Lanning carried out the fatal stabbing. ”

The court heard it was not disputed that Lanning stabbed Mr Daniel or that he used a knife he had been carrying.