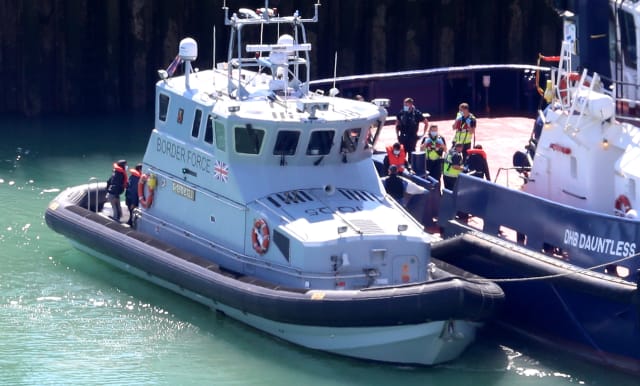 The UK Government is locked in a row with France over differing “interpretations” of maritime law in efforts to tackle the Channel migrant crossings crisis, MPs have heard.

Home Secretary Priti Patel sought to level blame at her French counterparts as she told the Commons Home Affairs Committee of the “unacceptable” numbers of people making the perilous journey in small boats.

Record numbers are thought to have made the crossing so far this year – particularly during the coronavirus pandemic – and more incidents were under way on Wednesday as Ms Patel discussed the problem with MPs.

There is a “major, major problem with these small boats”, she said, adding that the only way to make that route to the UK “unviable” was to intercept the boats at sea and turn them back to France.

She told MPs: “We are fundamentally looking at changing ways of working with France.

“I’ve had some very, very, I think it’s fair to say, difficult discussions with my French counterpart, even looking at interceptions at sea, because currently the French authorities are not intercepting boats at sea.

“And by that I mean boats that are just 250 yards away from the French coast.

“I feel there could be stronger enforcement measures on the French side and they have heard that from me.

“We want to break this route, we want to make this route unviable, and in my view the only way we can do this is by intercepting and returning the boats back to France.”

Asked by the committee if French authorities have powers to intercept boats in French waters, because officials there claimed they do not, she said: “That’s absolutely right and that is what we are working to achieve, right down to sharing legal advice, legal guidance in terms of maritime laws.

“A lot of this is governed by maritime laws and the French authorities’ interpretations of what they can and can’t do at sea.

“It is our advice that they can go ahead and do that. That has been part of the discussions that we have been having with the French authorities throughout the entire coronavirus crisis.”

Asked whether the “disagreement” over maritime laws is the basis of the problem as well as the terms of the Cherbourg agreement – which the committee heard is an informal agreement to intercept crossings at sea and repatriate boats back to France – she replied: “That is absolutely right.”

Ms Patel said the agreement has been “inappropriately” described by colleagues as a “gentleman’s agreement” but added: “These agreements are here to stand the test of time and to be operationalised.”

She said she had been “making the point repeatedly to French counterparts”, claiming the UK has offered to work with authorities at sea in joint exercises to demonstrate how boats can be returned safely.

She added: “It is equally important, along with maritime law, that we actually prevent loss of life at sea.”

Hundreds of millions of pounds have been spent in the last 10 years by her predecessors and on bilateral arrangements, Ms Patel said, adding that she wants to see more data and intelligence-sharing but suggested UK systems are “slightly more agile” than those on the Continent.

“In France, the system is not geared up to work in that way – that is part of the challenge that we have,” she said.

Her comments come just days after she hailed a “new operational approach” to dealing with crossings after meeting French Interior Minister Gerald Darmanin and agreeing to set up a Franco-British intelligence cell.

At the same time at least 180 migrants came to the UK across the Channel – a new single-day record.

Asked how many migrants had come into the country so far this year, she said: “I don’t have those figures”, despite confirming that she receives updates on a “daily basis”, but conceded there had been a “surge” in numbers during the coronavirus pandemic.

She added: “These numbers as shocking, appalling and unacceptably high.”

So far this year at least 2,552 migrants have made the crossing to the UK, according to analysis by the PA news agency.

As of July 2, 166 people were “ready” to be returned to Germany, Italy and France and return requests had been made for a further 577 who had come into the country this year alone, Ms Patel told MPs.

Although she praised French authorities for preventing “many more migrants from crossing” – more than 1,000 – she added: “Too many people are still making crossings.”

“If they were genuine asylum seekers they would claim asylum in their first safe country, which is France,” she said. “Let’s not forget many of them have travelled through many other European countries.”