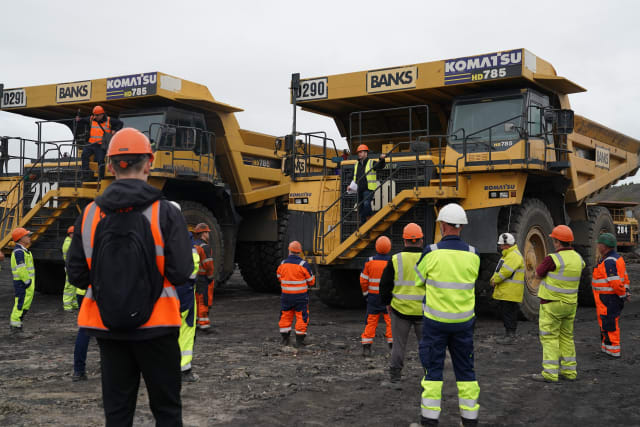 The last coal mining company in England has urged the Government to make a decision on a new open-cast site after it started the process of laying off staff as its current sites cease production.

Banks Mining staff are currently restoring two neighbouring sites north of Newcastle and the firm is due to stop coaling at its final surface mine at Bradley, County Durham, next month.

It has been waiting since April to hear if it can start production at the controversial Highthorn site near picturesque Druridge Bay, Northumberland, which has been opposed by locals.

A planning decision is yet to be announced by Communities Secretary Robert Jenrick.

Banks Mining invited journalists to be present when around 30 staff at the Brenkley Lane site near Newcastle were told that the redundancy process is starting.

The firm said all 250 mining employees could lose their jobs.

Managing director Gavin Styles stood on the steps of a huge dumper truck as he addressed the employees and urged them to put pressure on the Government to make a decision.

Normally Banks would operate a surface mine until the coal was extracted, restore the site, then move on to another, but it currently has nowhere else to go.

The firm said British industry still needs more than five million tonnes of coal a year, some of which is used to make steel and concrete, and this would have to be imported from Russia, which operates less environmentally friendly mines, with the added carbon cost of transporting it to the UK.

Afterwards, plant operator Steven “Chalky” White, who is 57 and has worked for the firm for 41 years, said: “I am angry more than anything else that there is so much need for this coal and yet the Government seems to be ignoring us.

“I voted for Boris, which makes me even more angry – I thought he might do us all right.

“I think he’s letting us down a bit.”

Shop steward and plant operator Graham Walton sent a message to Mr Jenrick, saying: “Stop messing about, give us our jobs and let us provide the coal that the country needs.

“We can provide it at less CO2 (than importing it).”

“It’s absolutely gutting, it’s unknown of for guys to spend north of 40 years working for the same company, that’s testament to how Banks treat their employees,” he said.

“They have nowhere for them to go because of the government indecision.”