Old soldiers being sacrificed by Government to keep peace in NI, MPs told 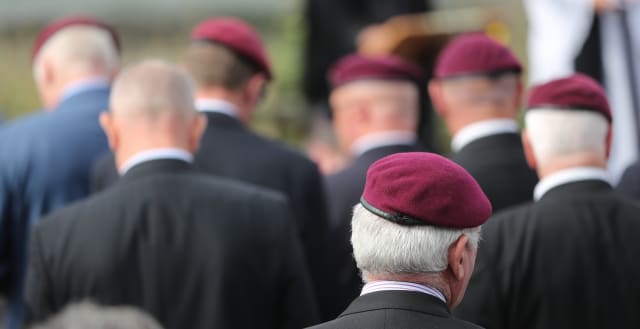 The Government has been prepared to sacrifice a few old soldiers for the sake of sustaining the peace process in Northern Ireland, MPs have been told.

Giving evidence to the Northern Ireland Affairs Committee, a veterans campaigner claimed former service personnel are being unfairly hounded amid a desire by the republican movement to rewrite the history of the Troubles.

Former SAS soldier Robin Horsfall, a member of the Million Veterans March campaign, said ex-servicemen are opposed to any form of prosecution amnesty over historic incidents, but he insisted cases should only be pursued if there is fresh evidence.

Mr Horsfall was one of several witnesses from groups representing former security force members who gave evidence to the committee on the Government’s latest plans to deal with the toxic legacy of the Troubles.

“If they can achieve that then they can turn around and say ‘See, we told you there were atrocities; sees we told you the soldiers were occupying Northern Ireland’ and they can create a completely new history based on that one conviction.”

“We feel that the Government is prepared to put a few old soldiers on a cross and sacrifice them for the benefit of peace in Northern Ireland or to keep the lid on Sinn Fein/IRA in order to stop people returning to increased levels of violence.”

His comments were challenged by committee chairman Simon Hoare, who questioned what evidence he had to back up his claim about the Government.

“Rather than pointing to specific pieces of evidence, our members feel this way.”

The committee is examining the Government’s latest plans for dealing with historic cases.

In March, Northern Ireland Secretary Brandon Lewis announced that only Troubles killings with “compelling” new evidence and a realistic prospect of prosecution will receive a full police re-investigation.

The Government said most unsolved cases will be closed and a new law would prevent those investigations into the decades of violence from being reopened.

It marked a significant step away from mechanisms agreed by the UK and Irish Governments and main Stormont parties in the 2014 Stormont House Agreement.

While details have yet to be fleshed out, the thrust of the new plan places less emphasis on criminal re-investigations and more focus on information retrieval for families still seeking answers.

Paul Young, from Justice for Northern Ireland Veterans Original Group, told the committee the plan, while short on detail, had offered some degree of comfort to veterans.

He said the Stormont House proposals were “dead in the water”.

“We do take some small comfort from the fact that they are proposing we have a review of those cases that have previously been looked at and found not to have a case to answer from previous ones, and then they’ll do a case review on it and then close them,” he said.

Harry Wragg, from Rolling Thunder, another campaign that has protested against the prosecution of veterans, said he and his colleagues feel they are being “sold down the river”.

“The British Government have completely and utterly let down our veterans.

“How they feel or the public feel – nothing is taken into consideration.”

Mr Wragg said that, if there is evidence of wrongdoing, then former soldiers should face justice.

But he added: “The people, the common people of this country feel that, yet again, we are being sold down the river to the terrorists.”