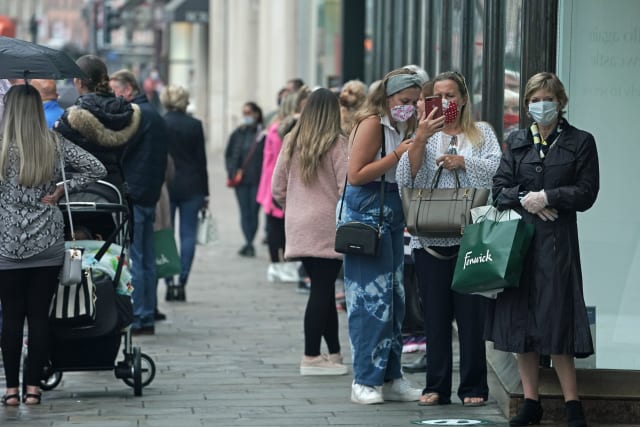 Face coverings will have to be worn in shops in England for the “foreseeable future”, Health Secretary Matt Hancock has said.

Some Conservatives have reacted with anger to the Government’s ruling that coverings will be mandatory from July 24, complaining it is a violation of civil liberties.

Former minister Sir Desmond Swayne described the measure as a “monstrous imposition”, while some grassroots activists cut up their party membership cards in protest.

There have also been warnings that the move will deter shoppers just as high streets are reopening with the easing of the coronavirus lockdown restrictions.

However, Mr Hancock insisted the wearing of face coverings in shops and on public transport is essential to prevent the virus getting out of control again.

“People will have to wear masks in shops and on public transport and in the NHS for the foreseeable future,” he told BBC Breakfast.

“The virus exists only to multiply and, without any measures, we know that each person infects another two to three people so we do have to have these measures in place, even though the number of cases are really low, to keep a grip on the virus.”

But the Health Secretary denied reports that he is planning to extend the requirement to offices.

“That isn’t going to happen and the reason is in offices you tend to spend a lot of time with the same people,” he told BBC Radio 4’s Today programme.

“Where the mask benefits is from you spreading the disease to other people when you have relatively short interactions with lots of different people.”

Mr Hancock also played down reports that the Government is preparing to raise capital gains tax (CGT) as it seeks to rebuild the public finances following the collapse of economic activity during the lockdown.

Speculation that Chancellor Rishi Sunak is preparing the ground for a CGT increase – putting the cost of the outbreak on the better off – was sparked by the disclosure that he had ordered the Office for Tax Simplification to carry out a review of the tax.

However, Mr Hancock told Sky News: “As far as I understand, there is no proposal and the Chancellor is not looking at tax changes now.

“We’ve just had the summer economic statement and apparently reviews like this are normal all of the time and not connected to any decision one way or the other.”

The Treasury said it is “standard practice” to keep all taxes under review.

A Treasury spokesman said: “There is no expectation or plans for policy changes as a result.”