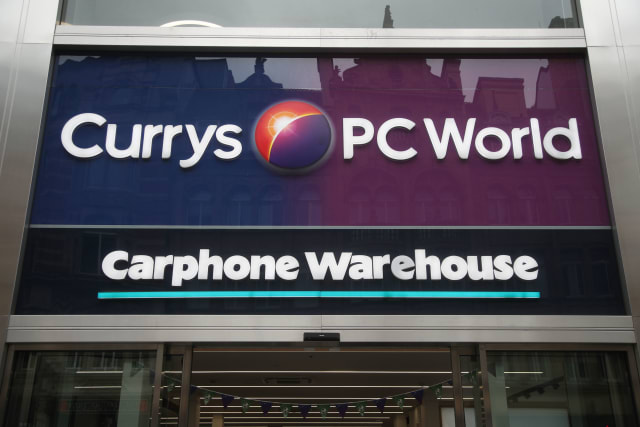 Electricals retailer Dixons Carphone warned over “weakening” spending later in 2020 as it revealed that annual profits more than halved despite a surge in online sales.

Shares in the chain tumbled as much as 10% after it revealed a cautious outlook for the year ahead after a resilient performance throughout the coronavirus lockdown.

The group – which has almost 940 stores in the UK and worldwide – saw annual underlying profits more than halve to £166 million for the year to May 2, down from £339 million the previous year.

The results were still better than most analysts had expected, with full-year like-for-like electricals sales up 1% in the UK and Ireland, despite lockdown forcing the closure of its stores.

But investors baulked at the group’s concerns over consumer confidence and worsening trading at the mobile business.

Group chief executive Alex Baldock said: “Since the year-end, all our electricals businesses have continued to grow sales.

“Where our stores have reopened we’ve performed well, while continuing to see strong online sales growth.

“That said, we expect a weakening of consumer spending later this year and are being cautious in our planning.”

On a statutory basis, it saw group pre-tax losses of £140 million, but this was narrowed from losses of £259 million the year before.

Earnings were hit by lockdown store closures and worse-than-expected sales in its troubled mobile arm.

Electricals sales held up well thanks to surging online demand, racing 166% higher for the UK and Ireland in April and 22% overall in the year as shoppers rushed to snap up home working and schooling supplies amid the lockdown.

But mobile sales slumped 20%, sending the division to a £282 million full-year statutory operating loss, and losses in 2020-21 are expected to widen.

The group announced in March that it was shutting all its 531 standalone Carphone Warehouse mobile phone stores in the UK, affecting nearly 3,000 staff.

It said the mobile woes were compounded by the enforced lockdown closure of its three-in-one stores, which house Carphone Warehouse concessions, with a low proportion of sales switching online.

Dixons now expects breakeven at the mobile arm to be delayed by up to a year.

Sophie Lund-Yates, equity analyst at Hargreaves Lansdown, said: “Customers may have splurged on their at-home set-ups, but, as the economic outlook gets gloomier by the day, it’s fair to assume that discretionary spending is going to be pinched.”