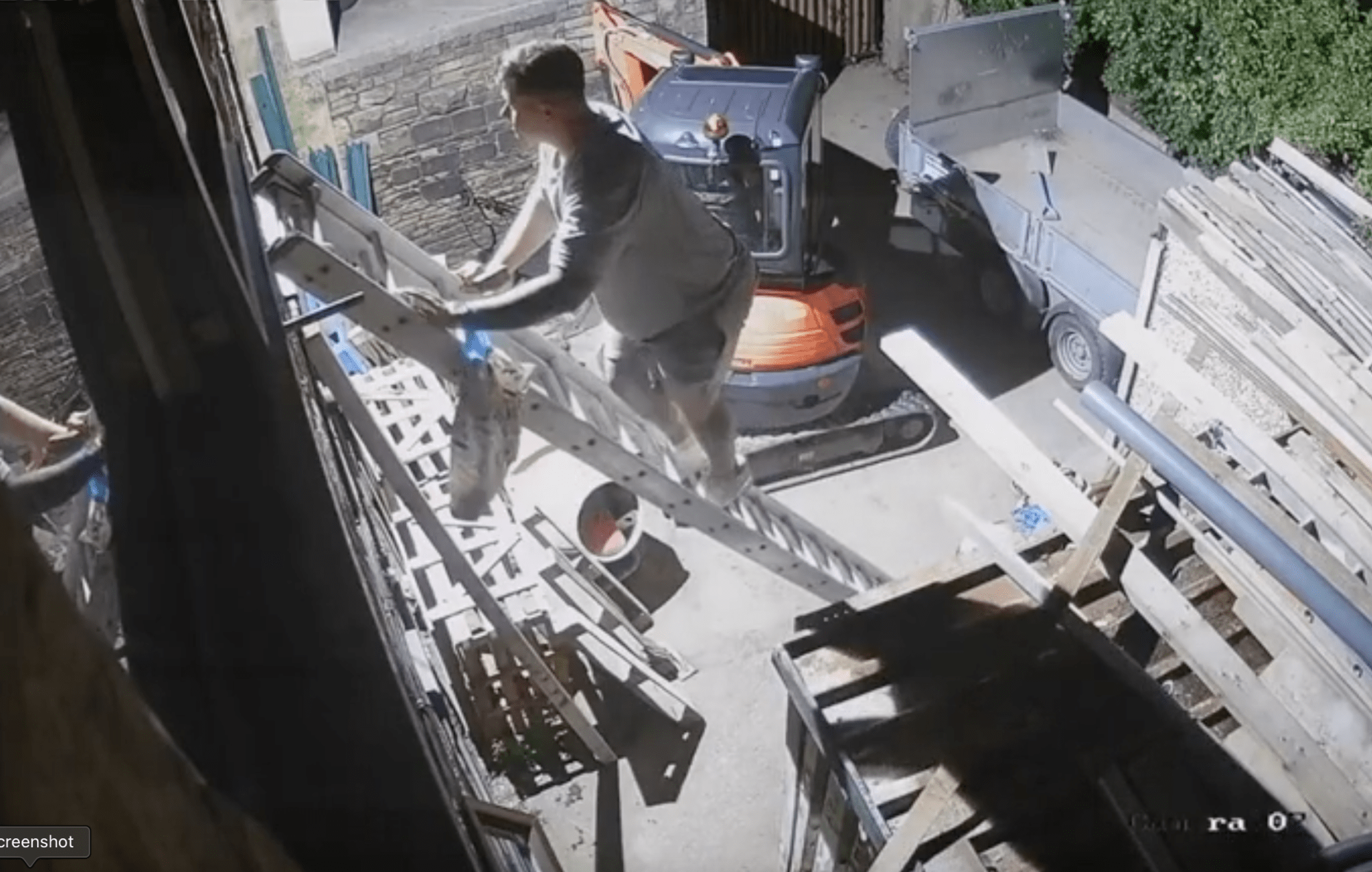 Video and words from SWNS

This is the moment a boozed-up man broke into his home after a night out causing £300 worth of damage - all because he didn't want was his £7 doner kebab to go cold.

Reece Barr, 25, was captured on his own CCTV camera climbing a 20ft ladder armed with a hammer in one hand and a kebab in the other at 1am after a "Sunday session".

The sozzled fitness instructor had downed 20 pints of lager and at least five Jager bombs on a night out with his pals, but discovered he did not have a key to his house.

His dad Brian - who had also been out boozing with him earlier in the night - had gone to stay at his partner's house, which left Reece with no way of entering.

Reece initially tried to get some kip in the bar he had built for himself in the garden, but decided that he needed his own bed and that his kebab would go cold.

So after retrieving and setting the ladder up, he scaled it while expertly balancing a hammer in his right hand and a bag of food in his left.

Once he reached the summit, he gave his bedroom window five whacks with the hammer to smash the glass panel, causing around £300 worth of damage.

He then swapped his kebab over to his right hand before guiding it through the gap before diving in afterwards to devour it in the comfort of his own bedroom.

Reece insisted it was "worth it" to be able to eat his chicken and doner feast on a naan bread warm.

He said: "The mission was to get inside and eat my kebab before it went cold.

"The kebab was safe and nobody was seriously injured - and it was definitely worth saving.

My dad was out with us and had gone to his girlfriend's but I didn't know, I thought he had gone home.

"When I got home, he wasn't there so I had no way of getting in. I tried to sleep in my bar, laying on newspaper, but it was freezing.

"So I went round the front, got the ladder, brought it round the back and climbed up.

"I was very drunk, I'd had at least 20 pints of Stella Artois and we had some Jager bombs."

Reece was shocked to wake up in his own bed the next morning after his heavy boozing session.

He said he began to piece the events of the previous night together when he noticed the smashed window and the ladder outside.

But when he checked the CCTV cameras at the family home in Leeds, West Yorks., he was stunned to see himself staggering up the ladder.

He added: "I was very drunk, I remember getting in, but I don't remember how.

"I looked out the next morning and saw the ladder and broken window and I thought 'that's how I got in then' and I checked the CCTV footage.

"When I saw the footage, I laughed. It was hilarious - in my state I was pretty proud of how I did.

"I thought there was no way I could get up there when I watched it back.

"I obviously thought it would be a good idea to scale this ladder at one in morning with a hammer in my hand."

Reece had been out boozing with his dad and some mates on Sunday, July 12, and had over-indulged after not being able to have a proper night out during lockdown.

He said he would usually drink around 10-15 pints, but "got carried away" after meeting up with pals for the first time since lockdown.

Reece added: "A couple of cuts and a boarded up window, but other than that everything is fine.

"I showed my dad the footage the next day and he laughed and said 'as long as you're all right, that's the main thing'.

"He couldn't believe it, he was like 'there's no way you've got up there'."

He uploaded the hilarious CCTV footage to social media to the delight of his friends.

Reece added: "It has been mental, I've had hundreds of likes, comments and shares.

"A few my mates heard about what I'd done so I thought I'd upload the video so they could all see it."