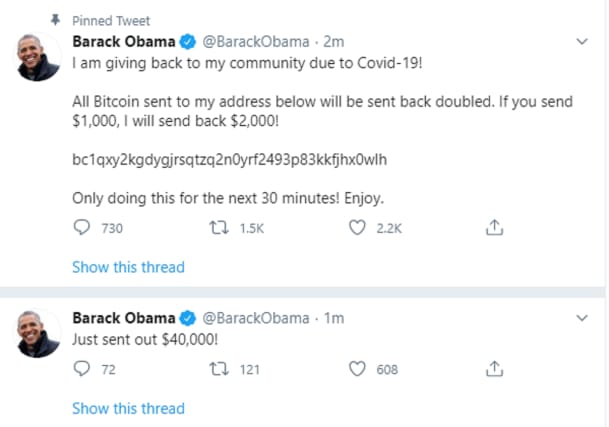 High-profile Twitter accounts, including those of Barack Obama, Elon Musk and Kanye West, have been hacked as part of a widespread cryptocurrency scam.

The accounts which have large Twitter followings were simultaneously hacked on Wednesday evening, and a message posted encouraging users to send 1,000 dollars (£794) to a Bitcoin address.

In return, users are promised that their money will be doubled and returned to them.

The message read: "I am giving back to my community due to Covid-19! All Bitcoin sent to my address below will be sent back doubled.

"Only doing this for the next 30 minutes! Enjoy."

A number of company accounts, including that of Apple and Uber, were also hacked with the message posted.

Most of the tweets were deleted within a number of minutes, but many had been retweeted thousands of times.

Twitter has said it is aware of the security incident.

In a statement posted online, it said: "We are investigating and taking steps to fix it. We will update everyone shortly."

Tyler Winklevoss, who founded cryptocurrency company Gemini alongside brother Cameron, tweeted earlier today: "WARNING: @Gemini's twitter account, along with a number of other crypto twitter accounts, has been hacked. This has resulted in @Gemini, @Coinbase, @Binance, and @Coindesk, tweeting about a scam partnership with CryptoForHealth. DO NOT CLICK THE LINK! These tweets are SCAMS."

His brother Cameron added: "ALL MAJOR CRYPTO TWITTER ACCOUNTS HAVE BEEN COMPROMISED.

"2FA / strong password was used for @Gemini account. We are investigating and hope to have more information shortly."