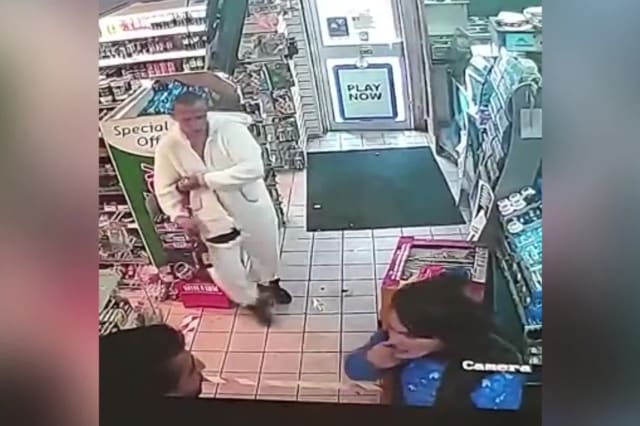 Shocking CCTV footage shows a thug dressed in a unicorn onesie confronting a shopkeeper while a woman spits in his face - in a bid to steal two bottles of Buckfast.

The horrifying moment was captured at 9am on a Sunday morning - an hour before shopkeepers in Scotland are allowed to sell booze.

Dad-of-three Sanjay Singh had refused to serve the boozed-up yob, dressed in a unicorn onesie, who was accompanied by a young woman, on the grounds it was against the law.

Mr Singh, 43, believes they had been on an all-night bender and wanted to continue partying through Sunday morning.

But the pair, aged in their mid 20s, became aggressive and swiped two bottles of tonic wine, which they had demanded, as well as trashing the store.

The young woman could be seen spitting in Mr Singh's face as he ushered them to the door.

"They were high or had been drinking, people want their alcohol and the only thing stopping them is the shopkeeper.

"They had been up all night, they were in their 20s - old enough to know better.

"They got angry because I wasn't going to serve them.

"They were saying 'I want what I want'.

"I was just asking them to leave the store, there were three elderly customers in the shop in their late 70s.

The shocking confrontation happened at the Park Farm Post Office branch of USave, in Port Glasgow, on July 5.

Mr Singh said he was lucky the spit hit him on the chin rather than full in the face.

He added: "It is disgusting at any time but especially when there is a virus and a pandemic going on.

"We decided to stay open because there's not enough shops in this area.

"It was very hard for the first few months.

"As a company we thought it was the right thing to do.

"I just want to go to work, that's what I want to do every day, but I don't go to work to deal with this.

"I haven't been tested but I haven't shown any symptoms."

A spokesman for Police Scotland said: "Around 8.55 am on Friday, 5 July, 2020, police were called to an incident in a post office/convenience store in Arran Avenue, Port Glasgow, in which the shopkeeper was assaulted and a quantity of alcohol was stolen.