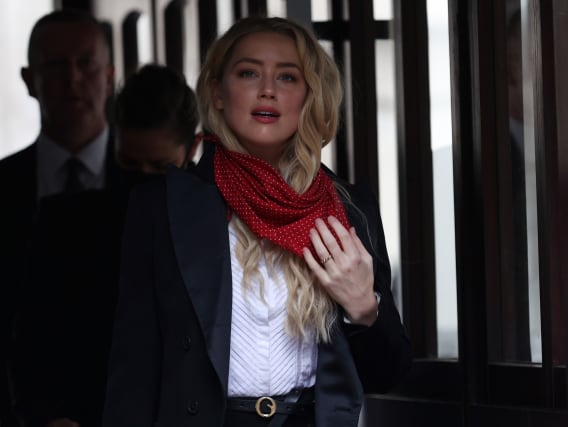 A Hollywood stylist has told the High Court Amber Heard had “no visible” injuries the day after the actress alleges Johnny Depp was violent towards her during a heated row.

Samantha McMillen said she spent “much of the afternoon and early evening” with Ms Heard, 34, on December 16 2015 as the star prepared to appear on James Corden’s The Late Late Show and she could “see clearly” that Ms Heard had no marks, cuts or bruises.

Mr Depp, 57, is alleged to have been violent towards Ms Heard in an argument at their Los Angeles penthouse on December 15, which he denies.

The Hollywood star is suing The Sun’s publisher, News Group Newspapers, and its executive editor Dan Wootton over an April 2018 article which labelled him a “wife beater”.

In a witness statement, Ms McMillen said that she saw Ms Heard “in good light, at close range, wearing no makeup” the following day, adding: “I could see clearly that Ms Heard did not have any visible marks, bruises, cuts, or injuries to her face or any other part of her body.”

Ms McMillen claimed that after her appearance on the programme, Ms Heard said to her “can you believe I just did that show with two black eyes?”

The stylist said: “Ms Heard did not have any black eyes, and had been visibly uninjured throughout the day and at that moment.”

In her written statement, Ms McMillen also claimed she “interacted closely” with Ms Heard five months later, on May 24 2016, at Mr Depp’s house in west Hollywood.

This was shortly after another episode in which Ms Heard alleges the Pirates Of The Caribbean star threw a mobile phone at her, hitting her in the eye, and smashed items with a wine bottle.

Ms McMillen’s statement says: “I went to the house in the afternoon, and encountered Ms Heard. Ms Heard was not wearing makeup.

“There were no visible marks, bruises, cuts, or injuries to her face or any other part of her body. I saw her by the kitchen door during daylight in Mr Depp’s house.

“She gave me a hug, crying. After hugging me, she began to have an intense conversation in Spanish with Mr Depp’s housekeeper, Hilda Vargas.”

Ms McMillen also said that three days after her encounter with Ms Heard, on May 27, she saw in the media that “Ms Heard had gone to court with prominent injuries visible on her face”.