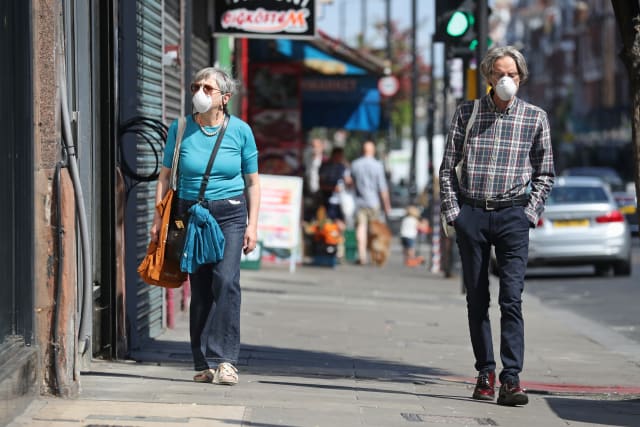 Retailers and police must both play a role in enforcing the use of face coverings by shoppers in England, a Cabinet minister has said after officers warned the law would be unenforceable.

Environment Secretary George Eustice also defended the delay in introducing the measure to combat the spread of coronavirus as the UK relaxes the lockdown.

Health Secretary Matt Hancock will announce in the Commons on Tuesday afternoon that anyone failing to comply with the order in England from July 24 could face a fine of up to £100.

Ken Marsh, chairman of the Metropolitan Police Federation, which represents rank-and-file officers in London, said the law will be “impossible for enforcement” as he called for shopkeepers to “step up to the plate and take some responsibility”.

“It will be nigh on impossible for enforcement because you won’t have a police officer on every shop door because there isn’t enough of us,” he told BBC Radio 4’s Today programme.

“If a shopkeeper calls the police because someone hasn’t got a mask on, they haven’t got the power to detain them so that person can just walk away.

“We’ll be driving around and around London looking for people who weren’t wearing masks, it’s absolutely absurd.”

Earlier on the programme, JD Sports chief executive Peter Cowgill suggested his stores will offer face coverings to anyone not wearing them but said it will not be for his staff to enforce the law.

“The guidance so far is that our store colleagues are not really to get involved and it’s a police matter to enforce rather than for them to get involved in any potential public disturbances,” he said.

Mr Cowgill also criticised the delay to introducing the measure, saying “it will have an impact on consumer confidence” as he blamed ministers for “inconsistencies and the indecisiveness”.

Urging the public to “play their part and to abide by these restrictions”, Mr Eustice said retailers and shoppers have responsibilities before the police will be asked to step in.

“Of course retailers have been very responsible in the way they’re approaching this challenge, they will have a role to play in making sure there’s compliance,” he told Today.

“But when it comes to that final sanction of issuing a penalty, that is something that only the police can do.”

Also raising questions over enforcement, the latest data showed not a single person in England and Wales was fined by police for breaching quarantine rules after arriving from abroad.

And only 10 tickets were handed out to passengers for not wearing face coverings on public transport, the figures released by the National Police Chiefs’ Council on Friday showed.

Meanwhile, Mr Eustice said the face coverings would not be compulsory for shop staff, or in pubs and restaurants, and he defended the delays to introducing the measure.

He told the BBC that ministers want to “give people time to plan and prepare” by delaying the enforcement of the measure until July 24.

The Cabinet minister said the measure, which had been in place in Scotland since Friday, was now backed by the Westminster Government because the evidence “has been evolving”.

The move follows a weekend of confusion over whether ministers intended to make face coverings compulsory after Boris Johnson said they were looking at “stricter” rules.

The senior Cabinet Office minister Michael Gove said on Sunday he did not believe they should be mandatory and that it was better to “trust people’s common sense”.

However, during a visit to the London Ambulance Service on Monday, the Prime Minister offered the clearest signal he was going down the route of compulsion, saying the Government was looking at the “tools of enforcement”.

Ahead of Tuesday’s announcement by Mr Hancock, a No 10 spokesman said: “There is growing evidence that wearing a face covering in an enclosed space helps protect individuals and those around them from coronavirus.”

The Government has been urging people to wear face coverings in confined spaces such as shops since early May and they have already been made compulsory on public transport in England since mid-June.

As is the case on public transport, children under 11 and those with certain disabilities will be exempt.

For Labour, shadow health secretary Jonathan Ashworth said ministers needed to explain why it had taken them so long to act.

“The Government has been slow and muddled again over face coverings,” he said.

London mayor Sadiq Khan, who has been pressing for face coverings to be made mandatory, said ministers should not wait until July 24.

“It’s a disgrace that there’s been days of mixed messages and confused communications from ministers,” he said.

“We can’t afford to wait another day and the Government should bring this policy in immediately – further delay risks lives.”