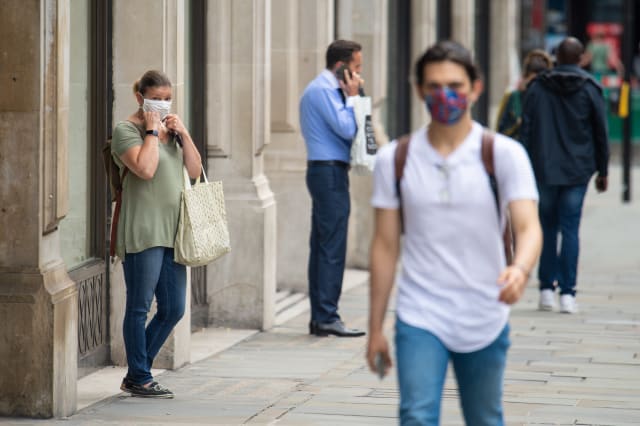 Police chiefs said officers should only be involved “as a last resort” if shoppers refuse to wear face coverings in England.

Senior officers were blindsided by the announcement that it will be mandatory to wear the items from July 24, with shoppers facing a £100 fine if they refuse to comply.

The National Police Chiefs’ Council (NPCC) said shopkeepers should be expected to manage entry into their stores and compliance with the law while inside.

The Police Federation, representing rank and file officers, said it was “unrealistic and unfair” to expect them to patrol the aisles looking for people breaking the coronavirus regulations.

Health Secretary Matt Hancock told MPs: “Should an individual without an exemption refuse to wear a face covering, a shop can refuse them entry and can call the police if people refuse to comply.

“The police have formal enforcement powers and can issue a fine.”

They have “suffered disproportionately” during the outbreak, with the death rate of sales and retail staff 75% higher amongst men and 60% higher amongst women than in the general population, he said.

The decision to make face coverings mandatory in England’s shops, with exemptions for children under 11 and people with certain disabilities and breathing conditions, provoked fury in parts of the Conservative Party.

On social media, some grassroots members posted pictures of their cut-up membership cards, while in the Commons former minister Sir Desmond Swayne said “nothing would make me less likely to go shopping than the thought of having to mask up”.

He questioned whether police had been consulted about the move because they “will have to enforce this monstrous imposition against myself and a number of outraged and reluctant constituents”.

Mr Hancock told him: “Enforcement is for the police, but the enforcement, I think, will largely be undertaken by the British people themselves who have been remarkable in their fortitude, sticking with these rules even whilst they may be a frustrating imposition.”

NPCC chairman Martin Hewitt indicated senior officers were “unaware that the announcement was to be made last night” but they had time to work on the measures before they come into effect.

“We will expect retailers to manage entry to their stores and compliance with the law while customers are inside, with police involvement as a last resort,” he said.

John Apter, chairman of the Police Federation of England and Wales, said: “Policing the wearing of face coverings in shops can’t be a priority because we simply don’t have the resources.”

He added: “Only as this last resort should the police get involved.

“To expect my colleagues to be policing the supermarket aisles, looking for those shoppers not wearing a face covering, is unrealistic and unfair.”

“Usdaw expects the guidance to make it clear that shop workers will not be enforcing the wearing of face coverings,” he said.

“They are already dealing with more abuse than normal and this could be another flashpoint.”

Also raising questions over the enforcement of coronavirus rules, the latest data showed not a single person in England and Wales was fined by police for breaching quarantine rules after arriving from abroad.

And only 10 tickets were handed out to passengers for not wearing face coverings on public transport, the figures released by the NPCC on Friday showed.

JD Sports chief executive Peter Cowgill suggested his stores will offer face coverings to anyone not wearing them but said it will not be for his staff to enforce the law.

“The guidance so far is that our store colleagues are not really to get involved and it’s a police matter to enforce rather than for them to get involved in any potential public disturbances,” he told BBC Radio 4’s Today.

Federation of Small Businesses national chairman Mike Cherry called on the Government to deliver coverings or funding to buy them so customers are not turned away.

The shift in policy on masks follows a weekend of confusion over whether ministers intended to make face coverings compulsory after Boris Johnson said they were looking at “stricter” rules.

Senior Cabinet Office minister Michael Gove said on Sunday he did not believe they should be mandatory and that it was better to “trust people’s common sense”.

The Government has been urging people to wear face coverings in confined spaces such as shops since early May and they have already been made compulsory on public transport in England since mid-June.

The regulations will be made under the Public Health (Control of Disease) Act 1984, with a maximum fine of £100, reduced to £50 if it is paid within 14 days.

Shadow health secretary Jonathan Ashworth said ministers needed to explain why it had taken them so long to act, accusing them of being “slow and muddled”.