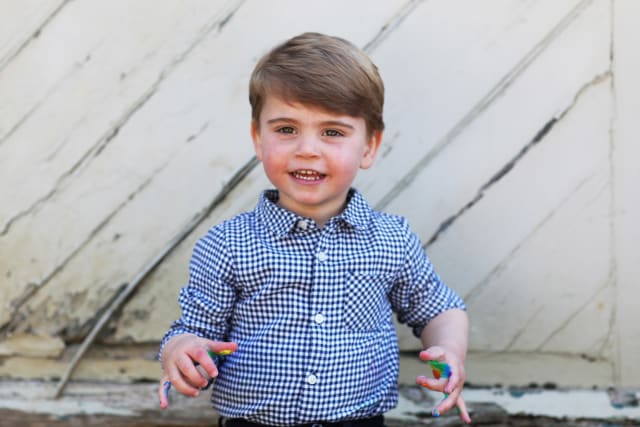 The Duchess of Cambridge has told how Prince Louis is too young to understand social distancing and wants to “cuddle everything”.

Kate revealed how her two-year-old was coping with the restrictions during the coronavirus pandemic as she met parents to mark the launch of the BBC’s Tiny Happy People digital resource.

Chatting with Kerry, Darren and their son Dexter, also two, under a large canopy in the gardens of Sandringham in Norfolk for a film shown on BBC Breakfast, the duchess said: “I was just saying, Louis doesn’t understand social distancing.

“So he goes out wanting to cuddle everything, particularly any babies younger than him.”

Kate also remarked on Louis’s ability to run at speed and how Louis and Dexter were “very close” in age with their birthdays only being a month apart.

Kate replied laughing: “Oh my God, I know that. You put Louis down and he’s off.”

She also opened up about Prince George, Princess Charlotte and Louis’s large appetites, saying: “My children have bottomless pits. I feel like a constant feeding machine.”

Dexter was asked by his mother: “Can you say Princess Kate?”

When he obliged and delivered the words with a big smile, the duchess replied: “You are so clever. Look at you. So many words.”

Kate asked Dexter: “Is that your digger? It’s very nice. Louis would like that digger.”

The duchess met with three families who have been involved in the creation and piloting of the online platform.

Dressed in a long black dress decorated with large white polka dots, Kate also held a socially distanced chat with Ryan and his eight-month-old daughter Mia from Dunstable, and Henrietta, Abu and their 11-month-old daughter Amirah from London.

Kate described Tiny Happy People as “gold dust” for parents and said she wished she had had access to the tips and tools available as a first-time mother.

The duchess has been working behind the scenes on the broadcaster’s education initiative and was interviewed by BBC Breakfast’s Louise Minchin about the project.

Kate secretly visited Broadcasting House last November to work on some of the video resources, helping with the character and background development for the two animations.

– Tiny Happy People can be found at bbc.co.uk/tiny-happy-people