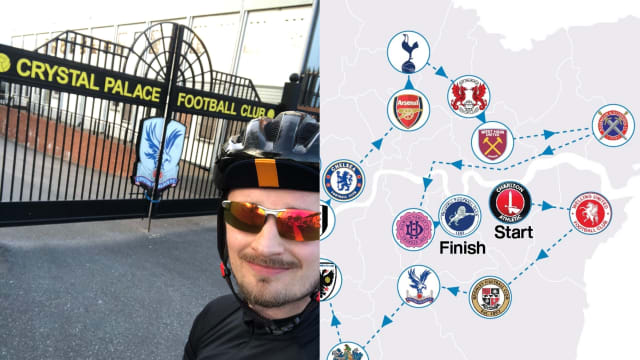 A group of five friends plan to cycle past 21 London football stadiums in a single day to raise money for charities hit by lockdown cancellations.

The grounds, from Dulwich Hamlet’s Champion Hill to Chelsea’s Stamford Bridge, account for all of the teams in the UK’s capital who play in the National League South and above – and Wembley.

Matt Cusworth, 26, cycled to each of the stadiums individually during lockdown but is now set to tackle a 130-mile route past them all with four companions.

“During lockdown I wanted to set myself a bit of a challenge and I realised I hadn’t really seen most of the grounds in London,” Mr Cusworth told the PA news agency.

“It was around the time fundraising events like marathons and cycling events were all being cancelled – so that stepped my inspiration up.”

Mr Cusworth estimates the trip on August 1 will take between 11 and 12 hours, with the team taking photographs and a drinks break at each stadium along the way.

“It’s not exactly the quietest of places so we’ll be expecting a bit of traffic too,” Mr Cusworth added.

The group have contacted the clubs along the route for support and Crystal Palace and Sutton United both shared their fundraiser on social media.

The cyclists are of varying competencies and all plan to stay together along the route, but only one of them supports a London club.

Asked if Nick Russell, 30, will wear his Tottenham Hotspur shirt, Mr Cusworth said: “Maybe, I haven’t spoken to him yet but it might be a bit interesting going past Arsenal in a Tottenham shirt.”

The money raised on the team’s JustGiving page is going to five charities personal to those taking part.

“The one thing we were all aligned on is we wanted to choose charities that weren’t in the spotlight, ones which particularly may have suffered not being in the press and with fundraising events being cancelled,” Mr Cusworth added.

Mr Cusworth is raising money for Fight for Sight, in tribute to his late blind grandfather, while Bruce Bavin, 28, is collecting for Children With Cancer UK.

Liam Donaldson, 26, is fundraising for Shelter to help the homeless, while 29-year-old Shaun Ryder is doing it for the Royal National Lifeboat Institution (RNLI) and Mr Russell for the mental health charity Mind.