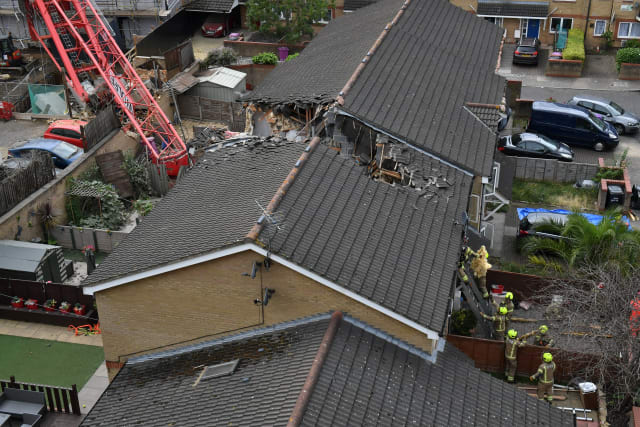 The family of a "loyal and caring" woman killed when a crane collapsed onto their house in east London said they have been left "beyond devastated".

June Harvey, 85, was killed and at least four others injured in the incident on Wednesday last week, including a construction worker who was taken to hospital in a critical condition.

Ms Harvey's family said she was a "true Eastender", who loved gardening and bingo, as they demanded answers on how the 20-metre crane crashed through the roof of their terraced house in Compton Close, Bow.

Her niece Jacqueline Atkinson, 63, who also lived in the house with her 28-year-old son Sam Atkinson and dog, Teddy, was just metres away from Ms Harvey when the crane hit their home.

"I was upstairs in the same room as June when the crane hit," she said.

"My son managed to help me escape by pushing a ladder up to the bedroom window and helping me climb down.

"I couldn't believe it when I saw the crane had smashed into the house leaving it like a pile of rubble.

"There was dust everywhere and Sam and I were both taken to hospital but sadly June didn't make it."

Her son, a chef in Canary Wharf, last week said the noise was so loud he thought it was a "plane crash" and told of his and his mother's "miracle" survival.

Mr Atkinson said on Tuesday: "We need answers about how this happened. We have lost everything and now we have a funeral to arrange and respectfully ask that we are given space to grieve."

His mother said Ms Harvey, who had worked as a sewing machinist, moved into their house last year so she and her son could help look after her.

"She was loyal and caring a true Eastender," she said.

"She was a wonderful woman, and a talented seamstress who was totally dedicated to her family. We are beyond devastated by what has happened.

"June loved gardening and spent much of her younger life outdoors in the garden and had a huge knowledge of plants and flowers.

"She also loved bingo and used to go almost every night. She was a bingo caller for many years at a local hall."

Her family have set up a GoFundMe page to help pay for the costs of Ms Harvey's funeral, which has so far raised more than £2,000 – https://uk.gf.me/v/c/gfm/bow-crane-disaster.

The crane that collapsed was being used by Swan Housing Association and NU living on a site in Watts Grove.

The Metropolitan Police have launched a joint investigation with London Fire Brigade and the Health and Safety Executive.

Detective Chief Inspector Mark Wrigley said on Friday: "The investigation into how this crane came to collapse is still in its very early stages but I am appealing to the public to assist us in building a picture of how these events unfolded.

"I am looking for anyone who witnessed the incident, or the moments prior to the crane collapsing to get in contact."

PM expresses sympathy for those affected by Lebanon blast

Cases linked to Aberdeen outbreak in Scotland rise by 25