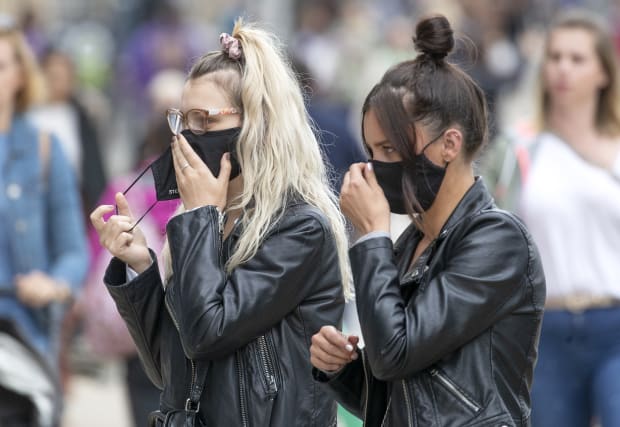 It will soon be mandatory to wear a face covering in supermarkets and other shops in England.

Starting on July 24, those going shopping need to have their nose and mouth covered or risk a £100 fine.

Initially many experts and authorities, including the World Health Organisation (WHO), suggested face coverings were not effective in preventing the spread of coronavirus but are now recommending wearing them in indoor spaces.

– So, has the science evolved on face coverings?

A report recently published by the Royal Society suggests that even basic homemade face coverings can reduce transmission if enough people wear them when in public.

The study, based on mathematical modelling, showed that if an entire population wore face coverings that were only 75% effective, it would bring the R value, which is the number of people an infected individual passes the virus on to, from 4.0 to under 1.0, without the need for lockdowns.

Meanwhile, another study which looked at coronavirus deaths across 198 countries found that nations which had policies favouring mask-wearing had lower death rates.

Dr Julian Tang, who is an associate professor of respiratory sciences at the University of Leicester, said wearing face coverings in public places could keep the R value below 1 by creating an “artificial herd immunity”.

He said: “If you look at other countries outside of the UK – such as Japan or Hong Kong – they have much higher masking percentages and are way below the epidemic curves of the West.”

But Dr Simon Clarke, an associate professor of cellular microbiology at the University of Reading, said that while face coverings may reduce the spread of cough droplets, robust epidemiological evidence on their benefits is still lacking.

He told the PA news agency: “You can see that they (face coverings) are mechanistically obvious but that is not borne out by what actually happens.

“What is really important is that you have the right mask, fitted properly and changed regularly.”

– Are there any benefits to wearing them?

Experts say the risk of coronavirus transmission appears to be higher in poorly ventilated indoor spaces and wearing face coverings in small shops or enclosed shopping centres could help reduce the spread.

Keith Neal, emeritus professor of the epidemiology of infectious diseases at the University of Nottingham, said: “Lack of strong evidence of their effectiveness should not be considered a problem but the evidence is accumulating that they have a part to play in reducing transmission and also in protecting the wearer.”

In addition, there is also increased evidence which suggests that many people with the virus who do not have symptoms can still be contagious.

Prof Neal told PA that while the evidence of the upsides of wearing face coverings is “supportive rather than definitive”, he adds that “it is the asymptomatic or the pre-symptomatic people where the mask has most benefit at the public health level”.

Meanwhile a report, published last month by the University of Oxford’s Leverhulme Centre for Demographic Science, noted: “Next to hand washing and social distancing, face masks and coverings are one of the most widely adopted non-pharmaceutical interventions for reducing the transmission of respiratory infections.”

– What does this mean for those looking to go back to the office?

Experts say wearing face coverings could provide an added line of defence amid growing evidence of airborne transmission of coronavirus.

Airborne transmission involves tiny virus-containing droplets, less than five microns in diameter, suspended in the air (aerosols) that linger for some time.

Dr Tang said: “In the office, it may not be possible to maintain social distancing, you can’t always open the windows and ventilation is probably very nominal. So wearing a mask gives an extra layer of protection.

“If half the people in the office wear a mask, it would increase artificial herd immunity to around 25%, which can reduce transmission overall within the office, just by reducing the number of people who are susceptible.”

– Are there downsides to face coverings?

There are many indoor spaces, such as pubs and restaurants, where the use of face coverings may not be possible.

Dr David Strain, clinical senior lecturer at the University of Exeter, said: “In these locations, strict physical distancing of more than two metres and/or physical barriers should be used in order to protect the staff and other customers from the risk of asymptomatic carriers.”

He added that for those who will be disadvantaged by a mandate to wear face coverings, such as those who rely on lip-reading, alternatives include “moving to the safer distance of two metres and removing the mask in order to facilitate communication, or the use of masks with a clear panel”.

Some experts have also shared concerns that wearing face coverings may give the wearer a false sense of security, although Prof Neal said there is “no evidence to suggest that is the case”.

– Are some face coverings better than others?

It emphasises that a face covering alone cannot protect people from Covid-19, and must be combined with social distancing of at least a metre and regular hand washing.

The Government has said coverings can be made from scarves, bandanas or other fabric items, as long as they cover the mouth and nose.

But scientists at the Leverhulme Centre, who studied different types of face coverings used by members of the public, say some coverings are not as effective as others, with loosely woven fabrics, such as scarves, shown to be the least effective.

Professor Melinda Mills, director of the Leverhulme Centre, said: “Attention must also be placed on how well it fits on the face; it should loop around the ears or around the back of the neck for better coverage.”

She added: “We find that masks made from high-quality material such as high-grade cotton, multiple layers and particularly hybrid constructions are effective.

“For instance, combining cotton and silk or flannel provide over 95% filtration, so wearing a mask can protect others.”