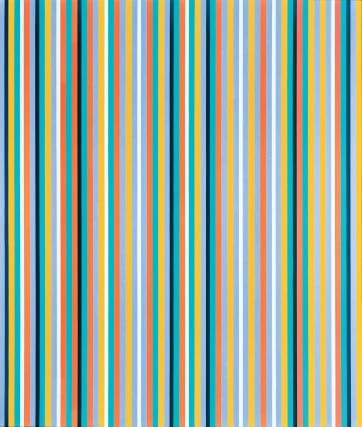 British Airways will begin auctioning off some of its multimillion-pound art collection later this month to help it cope with the coronavirus crisis.

A painting by Bridget Riley with an estimate of up to £1.2 million is among 17 pieces being sold by auction house Sotheby’s.

Cool Edge was produced by the British artist in 1982 and is described as “one of the finest examples” of her stripe paintings, with a use of colour inspired by a trip to Egypt.

It will go under the hammer in London on July 28.

British Airways will sell a total of 17 paintings, prints and works on paper this month, including some by Damien Hirst and Peter Doig.

The airline has suffered huge losses due to the collapse in demand caused by the coronavirus pandemic and it plans to cut up to 12,000 jobs in mitigation.

Its owner, International Airlines Group, said in May it was burning through cash and does not expect to return to full capacity until 2023.

British Airways’ art collection was amassed over several decades and has reportedly grown in value.

The pieces are displayed in its executive lounges at airports around the world and at its Waterside headquarters near Heathrow.

British Airways director of brand and customer experience Carolina Martinoli said: “We are fortunate to have been able to showcase a wealth of artists and creativity through our artwork collection, many of which have been a special part of the design of our lounges worldwide.

“During this unprecedented time we have made the decision to work with Sotheby’s, one of the world’s leading and most trusted auction houses, to sell a number of pieces by artists including Bridget Riley and Damien Hirst.

“We look forward to them finding new homes with this sale.”

Sotheby’s chairman for Europe Oliver Barker said: “This fittingly British collection presents a roll call of some of the greatest names of the second half of the 20th century, long-celebrated in the British Airways collection.

“From Bridget Riley, whose Cool Edge ranks among the finest 1980s stripe paintings ever to come to auction, through to the British modernists and the radical young British artists of the 1990s, this offering represents the best of British art.”