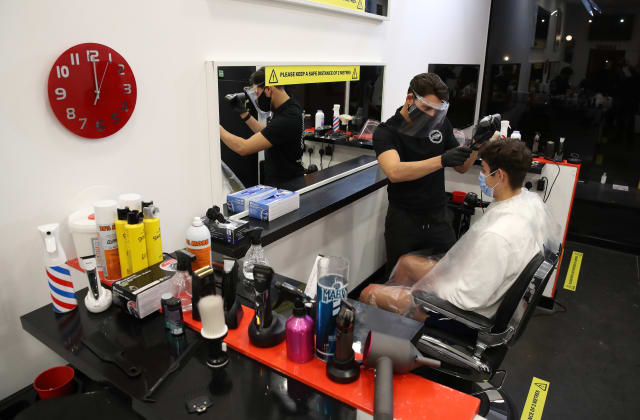 A barber in East Renfrewshire opened his doors at midnight on Wednesday as a thank you to loyal customers who supported him through lockdown.

Tony Mann in Giffnock decided to start cutting hair as soon as he was allowed to on the first day of hairdressers and other establishments in Scotland reopening.

His barber shop will be open for 24 hours on Wednesday with the 24-year-old also fully booked with appointments for the following fortnight.

Both he and Margaret McGillivray were on hand to welcome Sean Munro and Mitchell Wildman as their first customers – and among the first people in Scotland to have an official haircut – in nearly four months.

“To give back to my clients who have been so loyal during this whole lockdown I thought I’d do 24 hours just to get everyone seen to and make sure there was no fights for getting a haircut.

He expressed his gratitude for his clients’ “absolutely amazing” response.

“It’s been stressful but the good thing is I’ve now got the experience of doing a show up so doing it again wasn’t nearly as hard as the first time.

“No-one could prepare for Covid because no-one knew what was going to happen so I just had to play ball and do everything to the book.

“I’ve got three months behind me so I don’t think 24 hours is going to be a problem – I’ve been climbing munros for the last six weeks, if I can do six hours hiking up a hill what’s standing in the same spot cutting hair?”

Hairdressers and barbers are among the latest premises opening in Scotland on Wednesday along with indoor pubs and restaurants as further coronavirus restrictions are lifted.

Tony Mann’s opened in 2016, with the owner recently adding social distancing stickers, branded hand sanitiser and face masks, and other personal protective equipment to the shop which looks “completely different even to six months ago”.

During the 24 hours Mr Mann hoped to see 48 people in half hour slots with Ms McGillivray seeing around 34 in her 14-hour stint.

Mr Wildman was first in the door at the Fenwick Place shop for a fade cut at the stroke of midnight.

The school student said he had found lockdown hard but getting his hair cut again was “amazing”.

He told PA: “It’s been a long wait but I’m glad to finally get it done. I’ve had a few home cuts but they weren’t the best.

“You always get a good haircut, friendly people and friendly staff. You don’t want anything else.

“I come every two weeks. I like to keep it looking good. (The last four months) have been awful.”