Severely damaged human lungs ‘can be successfully recovered for transplant’ 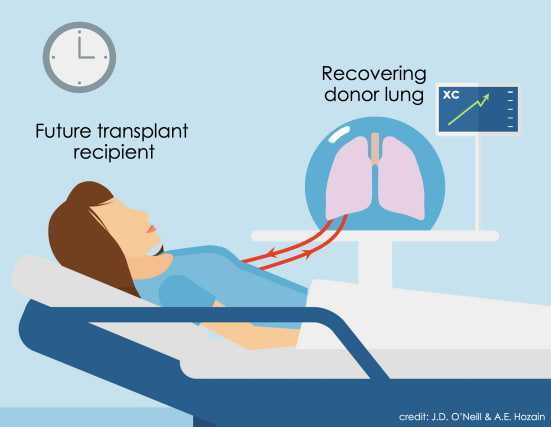 Damaged human lungs that have been rejected for organ transplantation could be reconditioned through the use of cross-circulation from a pig, research suggests.

Despite advances in the field, lung transplantation remains limited by the low availability of healthy donor organs.

Additionally, most donor lungs cannot be used due to severe, but potentially reversible, injuries.

However, this only provides a limited duration of six to eight hours of support – a time that is too short to recover the majority of severely damaged donor lungs.

A team from Columbia Engineering and Vanderbilt University has shown that severely injured donor lungs that have been declined for transplant can be recovered outside the body by a system that uses cross-circulation of whole blood between the donor lung and an animal host.

For the first time, a severely injured human lung that failed to recover using the standard clinical EVLP was successfully recovered during 24 hours on the team’s cross-circulation platform.

They said: “It is the provision of intrinsic biological repair mechanisms over long-enough periods of time that enabled us to recover severely damaged lungs that cannot otherwise be saved.”

The researchers connected five damaged human lungs, which had previously been rejected for transplantation, to the circulatory system of a pig.

The animals in the study published in Nature Medicine were treated with immunosuppressive drugs to prevent rejection of the lungs.

After 24 hours of connection, the histology and function of the damaged human lungs had improved, including one lung that had been declined for transplantation after EVLP.

The authors suggest that lungs rejected for transplantation, which cannot be recovered through the use of EVLP, could be reconditioned by this cross-circulation approach.

Lead investigator Gordana Vunjak-Novakovic, university professor and The Mikati Foundation professor of biomedical engineering and medical sciences at Columbia Engineering, said: “We were able to recover a donor lung that failed to recover on the clinical ex vivo lung perfusion system, which is the current standard of care.

“This was the most rigorous validation of our cross-circulation platform to date, showing great promise for its clinical utility.”

But the investigators emphasise that more work needs to be done before cross-circulation can become a clinical reality.

They note that future studies will be needed to assess the clinical potential of this approach, including accounting for the possibility that residual pig cells and factors in the lungs could cause immune responses in or disease transmission to the transplant recipient.

Looking ahead, the researchers hope to extend the benefits of their cross-circulation platform to the recovery of other human organs, including livers, hearts, kidneys, and limbs.