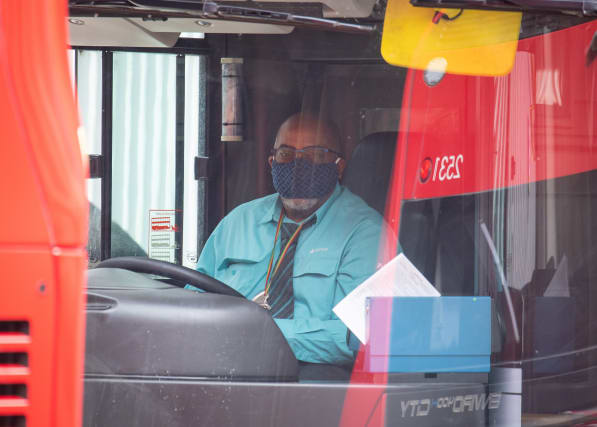 London buses have had their capacity increased by 50% in response to new social distancing guidelines, Transport for London (TfL) has announced.

Double-deckers can now carry 30 passengers, up from a limit of 20 introduced on May 29.

Before the pandemic, the vehicles were allowed to hold just under 90 people.

On June 23, Prime Minister Boris Johnson announced when two-metre social distancing cannot be applied a “one metre-plus” measure is acceptable if suitable mitigations are in place such as face coverings, increased hygiene and layout changes.

TfL reintroduced bus fares for all services on Saturday and front door boarding in most instances.

On April 20, passengers were told not to present their contactless, Oyster or concessionary card when boarding in a bid to boost the safety of drivers.

The resumption of fares collection began in late May and has now been rolled out across the network.

TfL said additional safety measures introduced across its bus fleet including areas such as poles and doors being wiped down with a strong disinfectant every day, and gaps in driver’s protective screens being sealed off.

Deputy Mayor for Transport Heidi Alexander said: “The coronavirus has had an unprecedented impact on London’s transport network and we have been working incredibly hard to ensure the safety of all our staff and passengers.

“The extensive safety measures that we have taken, combined with the Government’s change to social distancing rules, means that we can reintroduce front door boarding and accept more passengers on our buses.

“But this does not mean a complete return to normal capacity on services.

“I urge Londoners to continue to walk and cycle when they can to avoid travelling on public transport at peak times and remind them that they must wear a face covering for their entire journey.”