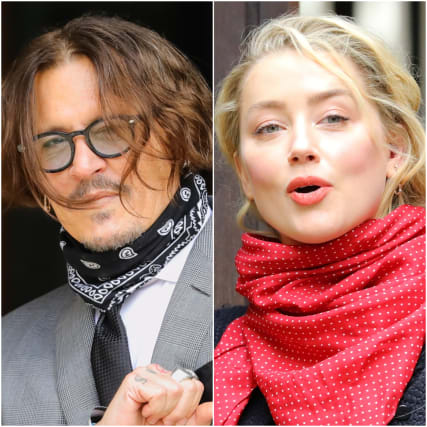 Johnny Depp contracted a superbug after his finger was severed in an incident in Australia, the High Court has heard.

The Hollywood actor said he "ended up getting MRSA" after having surgery to put a pin in the broken bone.

As he began giving his fifth day of evidence in his libel action against The Sun newspaper, Mr Depp denied an alleged incident of domestic violence against his ex-wife Amber Heard in March 2015, saying he would have been unable to attack her because he was wearing a cast with "a little dinosaur" on it at the time.

The 57-year-old actor is suing the tabloid's publisher News Group Newspapers (NGN) and its executive editor Dan Wootton over an April 2018 article which labelled him a "wife beater".

Mr Depp is said to have attacked Ms Heard, 34, throughout their tempestuous relationship, which has been described as "a crime scene waiting to happen" and put her in fear for her life – claims he says are "a choreographed hoax".

The actor's barrister, David Sherborne, asked him about an alleged incident in Los Angeles on March 23 2015, when he is said to have grabbed Ms Heard by the hair with one hand and hit her "repeatedly in the head with the other".

It is claimed the incident took place shortly after the couple took a trip to Australia, during which Mr Depp injured his middle finger.

Mr Depp said: "I flew back from Australia to LA to have surgery on the finger and, at that time, they had put a pin in it, in the broken bone, the fractured bone, but to no avail."

He added that he "ended up getting MRSA; it's quite a painful disease".

Mr Depp explained he was wearing a cast on his hand with a "little dinosaur" on it because he had decided if he was going to have to wear one he should have the children's "wraparound" on it as it was "more fun".

The actor confirmed he was wearing the cast at the time of the alleged incident in LA's Eastern Columbia building.

Mr Sherborne asked: "And with that cast on, would you have been able to grab her hair with one hand and punch her repeatedly with the other?"

Last week, the court heard evidence about the trip to Australia, during which it is alleged Mr Depp assaulted Ms Heard and "completely destroyed" a house in a drink and drug-fuelled rage, which he denies.

Mr Depp told the court that his finger was injured when Ms Heard threw a vodka bottle at him, which she denies.

The court heard that Mr Depp used his severed finger, dipped in paint, to scrawl graffiti in the house.

On Monday, Mr Sherborne also asked Mr Depp about an argument after Ms Heard's 30th birthday party at the couple's LA penthouse on April 21 2016, which the actor attended after a "bad meeting" with his new business manager.

Mr Depp said: "I was in the early stage of learning from my recently acquired new business manager that the former business managers had (taken) quite a lot of my money. They had stolen my money."

Mr Sherborne asked: "How much money had they taken from you?"

The actor replied: "It was put to me this way, because I had no idea about money or amounts of money.

"Since Pirates (Of The Caribbean) 2 and 3, I had – and this is ludicrous to have to state, it's quite embarrassing – apparently I had made 650 million US dollars (£510 million) and when I sacked them, for the right reasons, I had not only lost 650 million dollars, but I was 100 million dollars in the hole because they (the previous business managers) had not paid the government my taxes for 17 years."

Since Tuesday last week, Mr Depp has been questioned about 14 alleged incidents of domestic violence, as well as his Hollywood lifestyle, past relationships with Vanessa Paradis, Winona Ryder and Kate Moss, and his well-documented use of drink and drugs.

He is due to finish giving evidence on Monday after around 20 hours in the witness box at the Royal Courts of Justice in London.

The actor is suing NGN and Mr Wootton over the publication of an article on April 27 2018 with the headline: "Gone Potty: How can JK Rowling be 'genuinely happy' casting wife beater Johnny Depp in the new Fantastic Beasts film?"

NGN is defending the article as true, and says Mr Depp was "controlling and verbally and physically abusive towards Ms Heard, particularly when he was under the influence of alcohol and/or drugs".

All you need to know about thunderstorms and lightning