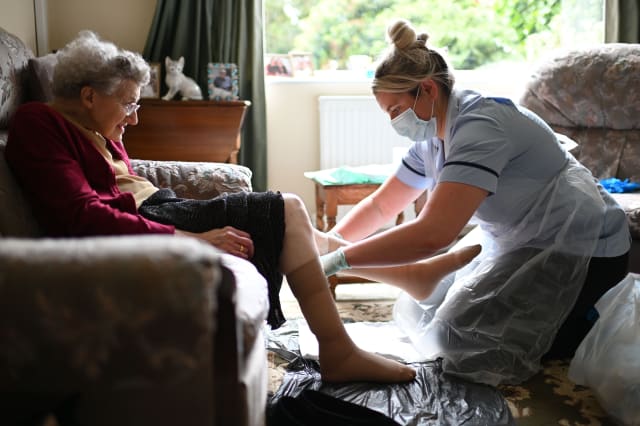 Campaigners have accused the Government of excluding care workers from its new immigration system and ignoring the “vital role” they have played during the coronavirus pandemic.

Critics hit out at the lack of visa options for foreign care workers in the points-based system, which is due to come into force on January 1 when EU freedom of movement ends.

Government documents published on Monday confirmed plans to deny visas to low-skilled workers, which could also include hospitality staff and labourers like builders, if they cannot meet the criteria for applications.

The move – which was fiercely criticised when it was initially announced earlier this year – has now been branded “shambolic” and “disastrous” by campaigners amid a groundswell of support for staff in the care sector through the Covid-19 crisis, in light of fears that NHS cleaners and porters will also be affected by the changes.

Rehana Azam, national secretary of the GMB union, described the rules as an “embarrassing shambles” which “make no consideration or acknowledgement of the vital job care workers have been doing these past few months”.

Martin Green, chief executive of Care England, said: “The Government’s decision not to include social care workers in the NHS visa scheme is another example of the way in which the Government treats social care staff as second class citizens.”

Satbir Singh, chief executive of the Joint Council for the Welfare of Immigrants, said: “We’ve gone from clapping for our key workers to calling them ‘low skilled’ in a few short weeks.”

Unison’s assistant general secretary Christina McAnea said the move will make recruitment “even harder”, adding: “Social care was in crisis long before the pandemic. Refusing to include care workers in the ​new NHS visa is a disastrous mistake that will make ​existing problems spiral.”

She said ministers “must get to grips” with the “massive issues facing social care, which only an urgent overhaul will fix”.

Designed to cut the number of low-skilled migrants entering Britain from the beginning of next year, the new system aims to make it easier for higher-skilled workers to get UK visas.

People who want to live and work in the UK will need 70 points to apply for a visa.

Some NHS health professionals, including social workers, will be able to apply for a specific health and care visa, designed to be quicker and cheaper, but this route will not be open to care workers, Downing Street confirmed.

Although senior care staff or managers may meet a “skilled” worker threshold for a visa, the vast majority of care workers would not be eligible, according to officials.

Other visa options for young people, students and graduates – and those granted to relatives of work visa applicants – may still allow foreign workers to get jobs in the care sector but there is no dedicated employment route for the industry.

Last month Brian Bell, the new chairman of the Migration Advisory Committee (MAC), told MPs social care staff should be paid at least £10 an hour to help fill vacancies and avoid the need to rely on migrant workers.

It is unlikely that overarching problems with staff shortages and job retention can be solved by the time the immigration changes are made, he said, but he suggested unemployment brought on by coronavirus could be an opportunity for the sector to attract staff.

The Prime Minister’s official spokesman said: “We want employers to invest more in training and development for care workers in this country.

“On care workers specifically, our independent migration advisers have said that immigration is not the sole answer here, which is why we have provided councils with an additional £1.5 billion of funding for social care in 2021/22, as well as launching a new recruitment campaign.”

Existing European Union workers in the care sector could apply to stay in the UK through the settlement scheme, “and a very large number have done so”, the spokesman said.

Boris Johnson said the UK will have a “humane and sensible” immigration system despite “taking back control” after Brexit.

Asked if he thought there would be enough people coming in to work in the social care system, the Prime Minister told reporters: “I do,” adding: “We’re not going to be simply slamming the gates and stopping anybody anywhere coming into this country.