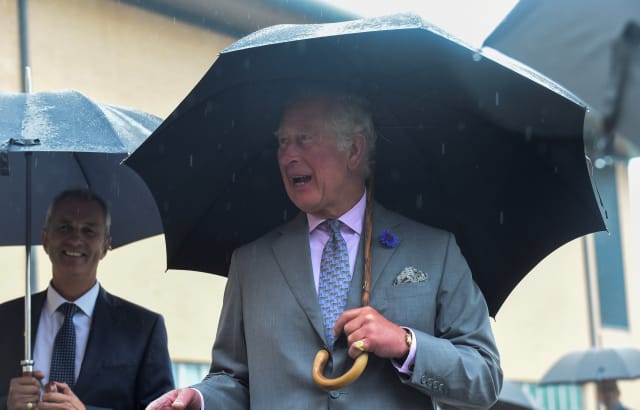 The Prince of Wales has made his first official visit to Wales since the lockdown to learn how the nation has been dealing with the coronavirus outbreak.

Charles travelled to a family-run travel and holiday business and heard how the firm was beginning to see signs of a recovery, and when he met medical staff from a hospital in Merthyr Tydfil he thanked them for their efforts.

The heir to the throne contracted Covid-19 in March and suffered from a loss of taste and smell for some time and when asked about the illness revealed he has also suffered from pneumonia in the past.

Sheltering from a downpour under an umbrella, the prince chatted to staff outside in an internal car park at the Prince Charles Hospital in Merthyr Tydfil, which he had opened in 1978.

Adele Gittoes, a senior executive with the Cwm Taf Morgannwg University Health Board, hosted the visit and afterwards talked about how staff dealt with the pandemic: “It was incredibly difficult.

“But at this time they were dealing with the unknown, which was the hardest part for all staff.”

The director of operations for the board’s Merthyr Cynon area said the experience of Covid-19 had made the hospital stronger and some staff, including herself had contracted the virus.

She had also asked the prince about his experience with Covid: “He did mention to me that he’s had pneumonia previously.

“It was quite interesting when we were going round we talked to a respiratory physiotherapist and respiratory consultant and the prince clearly engaged with them as he did with all the staff.”

Claire Davies, a Covid ward manager, spoke about the guilt she felt when convalescing from the virus: “I took two weeks off work, I wasn’t hospitalised but the guilt of being ward manager and not being at work that was hard – that was really, really difficult.”

Earlier Charles had visited Edwards Coaches, which has been run by five generations of the Edwards family since 1925, in nearby Mountain Ash, south Wales.

He heard how some of the 600 members of staff at the company helped people from 90 homes in Nantgarw to safety following devastating flooding in February.

Staff told Charles how they rushed to the village within minutes of receiving a call and evacuated people to Llantrisant, where a crisis centre was set up.

The heir-to-the-throne last carried out engagements in Wales on February 21, when he met those in Pontypridd town centre affected by the flooding that had deluged the area swamping villages like Nantgarw.

Nicholas Evans, 45, a local bus driver, told Charles how he had been due to drive to the depot to start his usual route on the day of the flooding in Nantgarw.

“I had a phone call saying ‘ignore the route, get to Nantgarw as soon as possible’,” he said.

“Within 10 minutes we were over there. It was devastating. There was eight-10 feet of water but the residents were all in good spirits.”

Edwards Coaches has been run by five generations of the Edwards family since it was established and now operates 310 coaches.

Before the pandemic, the company would carry more than 40,000 holiday passengers as well as operate school transport for 6,000 children each day.

Managing director Jason Edwards said: “His Royal Highness wanted to know the impact of Covid on a successful business.

“We were established in 1925 and I don’t think anything or anybody has seen anything like this.

“He did ask about whether we are seeing the possible signs of recovery, which we are starting to see.

“We’ve had a lot of people wanting to book coach holidays as soon as they can.”