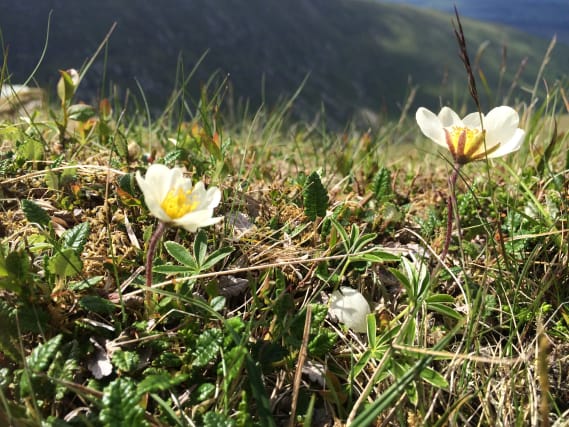 A threatened upland flower is to get a boost to its Lake District population with seeds collected from a Scottish estate, the team behind the scheme has said.

The mountain avens, an alpine plant with eight white petals and a yellow centre, is classed as “vulnerable” to extinction in England and endangered in Wales, but is found more widely in the Scottish Highlands.

Seeds from an area looked after by Jahama Highland Estates in the Western Highlands will be collected, propagated and planted on the slopes of Helvellyn, the third highest mountain in the Lake District, managed by the John Muir Trust.

The project, which also involves public bodies Scottish Natural Heritage and Natural England, aims to boost the fortunes of the mountain avens on Helvellyn, one of the few places further south it has a marginal foothold.

The plant, which grows in cold, sunny locations, has been found on lime-rich ridges at a height of 850 metres (2,800ft) on Beinn Na Socaich, a mountain in the Grey Corries near Fort William.

The area forms part of the 114,000-acre Jahama Highland Estates, which is part of the GFG Alliance of assets and businesses owned by industrialist Sanjeev Gupta, and neighbours land at Ben Nevis managed by the John Muir Trust.

Julia Stoddart, chief operating officer at Jahama Highland Estates, said: “It’s a privilege to have such a rich range of plants and wildlife on the estate and we take our management responsibilities as stewards of the landscape seriously.

“We’re delighted to help with this project, which we hope will strengthen the precarious populations of mountain avens across the border in England.”

Pete Barron, from the John Muir Trust, said: “Without the support of Jahama and the other partners in this project, the Lakeland population of this relatively rare mountain plant species could not have been augmented and protected.”

While rare in Britain, mountain avens are widely found elsewhere in the world, and are the national flower of Iceland and emblem of Canada’s Northwest Territories.