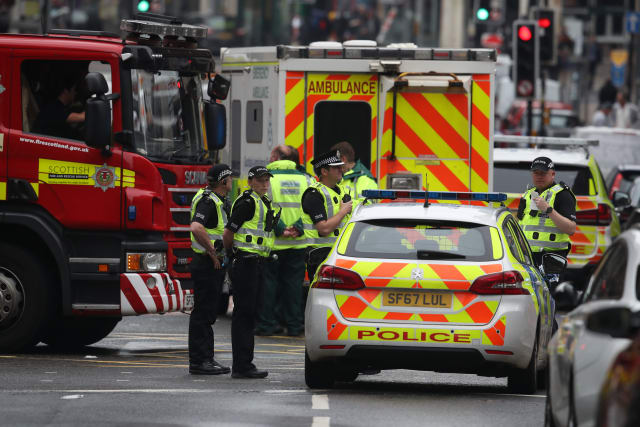 Criminals who assault emergency workers could face longer jail terms under plans being considered by the Government.

Ministers have launched a consultation following which legislation may be brought forward to double the maximum sentence for such offences to two years.

It would be the second time in two years that the sentence has been doubled, after the law was changed in 2018 to bring the maximum sentence to 12 months.

Home Secretary Priti Patel said the consultation sends “a clear and simple message to the vile thugs who assault our emergency workers” that they will not get away with such “appalling behaviour”.

She said: “Our police officers, firefighters and other emergency workers go above and beyond every single day – running towards danger to protect us all.

“They are our frontline heroes who put their lives on the line every single day to keep us safe, and yet some despicable individuals still think it’s acceptable to attack, cough or spit at these courageous public servants.

“This consultation sends a clear and simple message to the vile thugs who assault our emergency workers – you will not get away with such appalling behaviour and you will be subject to the force of the law.”

The Conservatives pledged in their 2019 election manifesto to consult on doubling the maximum sentence for assaulting workers in emergency services.

The Ministry of Justice said that more than 11,000 people were prosecuted for assaulting an emergency worker in 2019. A quarter of those found guilty received a suspended sentence or immediate custody.

Assaults cover acts including being pushed, shoved or spat at, but prosecutions can take place under more serious offences when an emergency worker is seriously injured.

The law change in 2018 also means that when a person is convicted of offences including sexual assault or manslaughter, the judge must consider whether the offence was committed against an emergency worker as an aggravating factor meriting an increase in the sentence.

Justice Secretary Robert Buckland added: “Being punched, kicked or spat at should never be part of the job for our valiant emergency workers who put their lives on the line to keep the public safe.

“Now more than ever they must be able to do their extraordinary work without the fear of being attacked or assaulted, which is why we’re determined to look at how our laws can protect them further.

“We will continue to do everything in our power to protect our police, prison officers, firefighters and paramedics – and ensure those who seek to harm them feel the full force of the law.”