‘Unsung hero’ officer reunites with family after isolating during pandemic 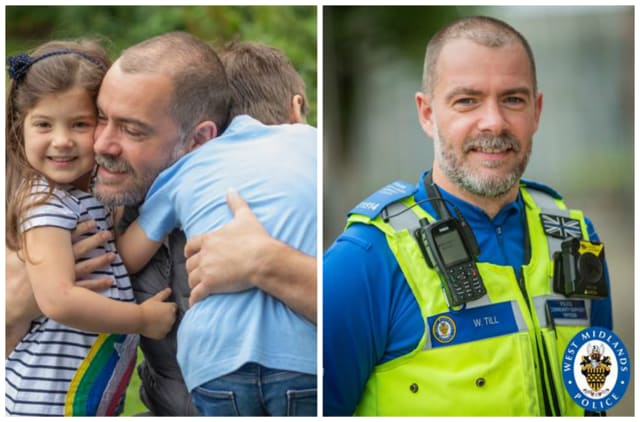 A police officer who moved out of home at the start of lockdown to protect his son has been reunited with his family.

William Till, a police community support officer with West Midlands Police (WMP), left his home in Stourbridge at the start of April because his son, Alfie, seven, was shielding following surgery to remove growths from his brain.

But with the guidelines around shielding having changed on July 6, he moved back home.

“It’s amazing to be back home,” he added. “I had a few days off for lots of cuddles and family time but was back on the beat on Thursday.”

Mr Till, 42, was worried his work would increase the chances of bringing coronavirus into the home and put Will, whose growths were caused by a bacterial infection called mastoiditis, at risk.

He kept himself to socially distanced visits during April, May and June, moving into a flat nearby.

“It’s one of the hardest decisions I’ve ever had to make,” said Mr Till, whose patch is in Wolverhampton city centre.

“I popped over for regular chats through the patio door but of course it all had to be socially distanced with no physical contact.

“Watching my children cry when I had to say goodbye was heartbreaking, not being able to hold them, but I knew it was the right thing to do,” he said.

“I wanted to keep working as part of the team. It was for times like these where communities need our support that I joined the police and accepted I had to sacrifice contact with my wife and children.”

Mr Till’s work during the pandemic has, according to WMP, included “educating people about the pandemic and encouraging them to adhere to the distancing rules”.

Neighbourhood Policing Sergeant Sean Corrigan said: “What Will has done over the last 15 weeks is testament to his community spirit and dedication to policing and serving the public of Wolverhampton.

“He paid for a room in a nearby house and restricted contact with his family through a patio door in order to continue working and ensuring he didn’t pose a virus risk to his wife and children.

“That’s an incredible sacrifice. He truly is an unsung hero of West Midlands Police.”