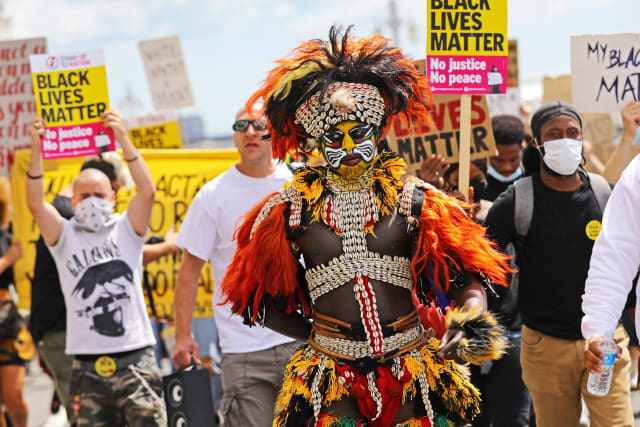 Thousands of protesters are marching through Brighton in support of the Black Lives Matter movement.

Demonstrators wearing black and holding up signs calling out systemic racism gathered by the city’s famous Palace Pier at midday on Saturday before moving off through the streets.

Many are wearing face masks and have placards with slogans including “Decolonise everything” and “Defund the police”.

They set off along the seafront shouting “Black lives matter every day” and “UK is not innocent”.

As protesters pass the Brighton war memorial they are being serenaded by a string quartet.

The musical tribute is in stark contrast to the protest last month which saw a small group occupy the stone monument amid a heavy police presence.

The latest protest comes days after outcry over a video showing a man shouting “I can’t breathe” while being restrained on the ground by three police officers in the city.

Sussex Police said the man was arrested and became aggressive towards officers before being placed on the ground.

The incident has been referred to the Independent Office for Police Conduct (IOPC).

Last month, more than 10,000 protesters marched through the East Sussex city in solidarity with the Black Lives Matter movement worldwide.

There have been calls for the popular seafront resort to become an officially anti-racist city.

Carmen Appich, chair of the council’s tourism, equality, communities and culture committee, said: “In the wake of the sickening killing of George Floyd (in the US) the global calls for change and the impact of Covid-19 on black and ethnic minority people, we made a public pledge to become an anti-racist council.

“We acknowledge that it is not enough to be non-racist and we must actively use our privilege, position as community leaders and platforms to challenge structural racism and injustice within the council and in the city.”

Antonio Banderas reveals he has Covid-19 on 60th birthday