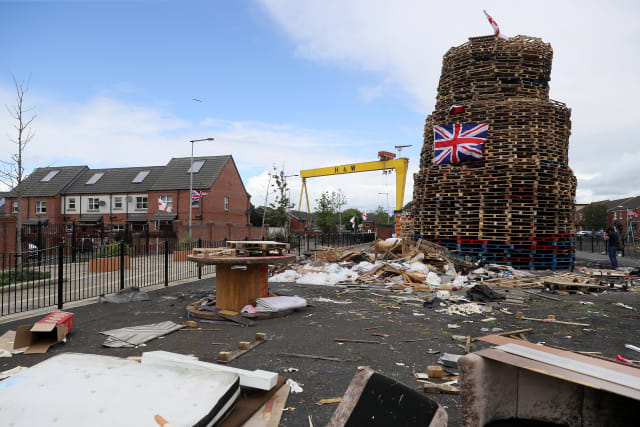 A smaller than usual number of bonfires are set to be lit at locations across Northern Ireland at midnight as part of the traditional July 12 celebrations.

Politicians and community leaders have urged caution to avoid large crowds gathering against coronvirus regulations, which state no more than 30 should gather together outside.

The Police Service of Northern Ireland (PSNI) issued a message on Saturday evening reminding the public to adhere to the regulations and maintain safe social distancing.

One towering pyre at Pitt Park on the Newtownards Road bears a banner which reads “stay one metre apart”.

Bonfires are lit in loyalist communities across the region every July 11 to usher in the main date in the Protestant loyal order parading season – the Twelfth of July.

While the majority pass off without incident, some are the source of community tension, with authorities previously having intervened to remove towering pyres on health and safety grounds.

A number of bonfires in east Belfast were cleared last month with the co-operation of the community to respect social-distancing rules.

However, some appeared to have been rebuilt following anger after hundreds gathered in west Belfast on June 30 for the funeral of IRA veteran Bobby Storey.

Unionist politicians have urged that the advice of the Orange Order to celebrate the Twelfth at home be followed.

He said his community cared too much about Northern Ireland to risk everyone’s health by restoring Eleventh Night pyres.

Mr Gibson added: “We do not want to mimic their bad behaviour.”