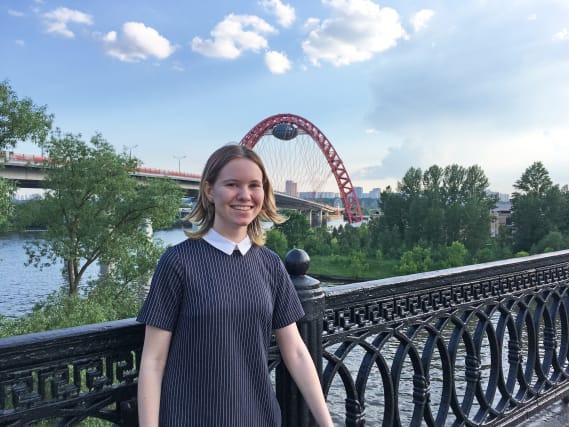 A Russian teenager has described learning Welsh as her “biggest passion” despite never having visited Wales or having any roots in the country.

Nastya Lisitsyna, 16, who was born in Smolensk and studies in Moscow, decided to learn the language nine months ago after seeing it on Instagram.

She has since completed the Welsh course on Duolingo, uses the Teach Yourself Welsh book and takes part in online workshops organised by Learn Welsh Pembrokeshire on behalf of the National Centre for Learning Welsh.

“Last summer, I heard the name of the village Llanfairpwllgwyngyllgogerychwyrndrobwllllantysiliogogogoch in a video and thought it would be a good idea to learn how to pronounce it,” Nastya said.

“I had to learn Welsh pronunciation rules to do it and I mastered it in the end.

“This led me to learning the language, and after nine months I am still as excited about learning Welsh as I was on the very first day.”

Nastya, who is studying natural sciences at the Higher School of Economics Lyceum in Moscow, has been studying online due to the coronavirus pandemic.

To improve her Welsh, she has been regularly speaking to people across Wales through Sadwrn Siarad workshops on Zoom.

A few of her fellow students and friends from across Russia and Belarus have also shown an interest in learning Welsh and they discuss the language together online.

There is no active Welsh society in Moscow but Nastya is hoping that will change.

“I would love to find more Welsh learners in Moscow and possibly meet them in real life one day,” she said.

“Welsh is my biggest passion, therefore I would like to contribute to its popularisation in Russia and share my love for it.

“I want to become fluent in Welsh and learn more about the country and its culture.

“My dream would be to visit Wales and practise my Welsh in the not too distant future.”