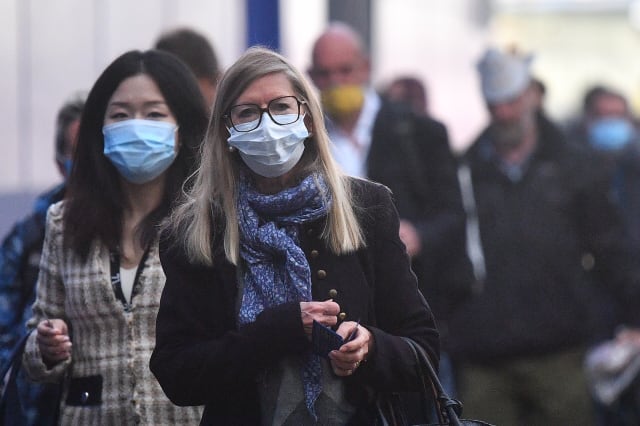 Downing Street has faced questions about why more Cabinet ministers are not wearing face coverings after new figures suggested the majority of Britons are covering up while in public.

Fresh data from the Office for National Statistics indicated that 52% of adults in Britain had worn a face covering when leaving their home in the final week of June, up from 43% on the week before.

Regardless of whether they had worn a face covering previously, 58% of the 1,788 adults quizzed between July 2-5 said they were very or fairly likely to wear one in the next seven days.

The level of usage provoked further questions for Number 10 about why so few of the Government’s leading figures had been spotted wearing a face covering.

There have been no public sightings of Prime Minister Boris Johnson wearing a face covering while Chancellor Rishi Sunak, following his summer economic statement, was pictured serving food to customers at a Wagamama restaurant in central London without a non-surgical mask.

Government recommendations as part of the “one metre-plus” guidance are that measures such as wearing a face covering should be taken if people indoors cannot keep two metres away from each other.

A spokesman for the Prime Minister, asked about the lack of ministerial face covering appearances, said: “I don’t spend my time with individual ministers but all the ministers abide by the social distancing guidance which is in place.”

When asked whether such a gesture was according to social distancing rules, the PM’s spokesman said: “The guidance is clear that you should stay two metres apart where you can.

“If that’s not possible, it is one metre, plus mitigation, and that mitigation has been set out in the guidance.”

During the morning broadcast round, culture minister Caroline Dinenage said she had taken to wearing a face covering “all the time” and said “a lot” of her colleagues were doing the same.

To mark face coverings being made mandatory on public transport last month, the Tory MP tweeted a picture of herself on June 5 while wearing a cloth covering.

Ms Dinenage told BBC Radio 4’s Today programme: “I have a fashion design student as a son who has run me up a few on his sewing machine and I wear them all the time.

“A lot of us are out there wearing them as we go about our daily lives.”

Ms Dinenage said “you’d have to ask the Prime Minister and the Chancellor” when questioned why neither of the highest ranking ministers had been photographed wearing a covering in public.

Health Secretary Matt Hancock has been seen wearing a face covering while visiting a hospital, while Culture Secretary Oliver Dowden also wore one while attending a gallery this week.

As of Friday, First Minister Nicola Sturgeon has changed the rules, making it compulsory for shoppers to cover their face with a face covering or similar garment in Scotland.

When asked whether ministers had considered introducing a similar rule for England, Ms Dinenage told the BBC: “We have said face coverings in closed spaces is advised, but people can use their own discretion – but of course we will keep this under review.

“This is a topic upon which scientists tend to have rather different views so we are looking at it as new scientific studies emerge.”

The president of the Royal Society, Professor Venki Ramakrishna, this week recommended that everyone should wear a face covering in public to reduce the risk of a second wave of Covid-19 infections.

A spokesman for the PM said a face covering was “no substitute for good social distancing practices” such as staying two metres away from others.