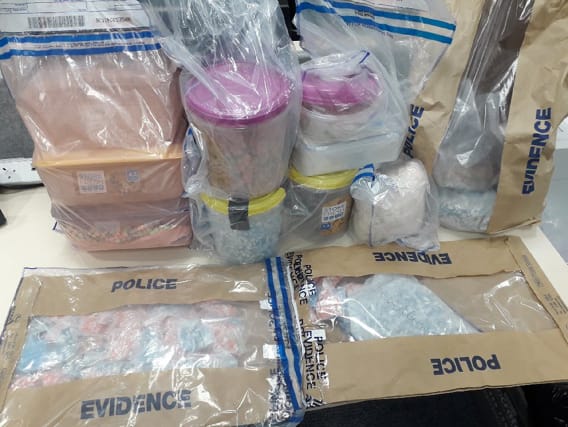 A man has been jailed for 10-and-a-half years after a large amount of MDMA was found hidden in children’s toys.

Judge Karen Holt said: “One cannot ignore that these were sizeable quantities of dangerous drugs which cause misery and destruction.”

Alex Agbamu, prosecuting, told the court Scotland was involved in drug trafficking to a “significant and serious level”.

He said the defendant was “knowingly concerned with how the drug was coming into the country”.

Scotland, who was sentenced via video link from Wandsworth Prison on Friday afternoon, also admitted being concerned in the fraudulent evasion of a prohibition on the importation of a class A drug, and to the possession of a weapon for the discharge of a noxious liquid/gas/electrical incapacitation device.

Following routine checks by Border Force officers on postal items entering the UK in August 2019, packages addressed to Scotland from the Netherlands were intercepted and found to contain just under 6kg of MDMA concealed within children’s toys.

Following a search of the property, sealed bags and labelled Tupperware tubs containing several kilos of crystal meth, MDMA and cocaine, 185,000 ecstasy pills, eight kilos of cannabis resin and over 10,000 LSD tabs, along with drug paraphernalia were found.

They were estimated to hold a street value of approximately £2.2 million – the largest known seizure of MDMA and crystal meth from a residential address in the UK to date, the Metropolitan Police believed.

The seizure is thought to be the first of its kind in helping dismantle a dark web drugs site in the UK, as items that were advertised online were the same as those found at Scotland’s address.

Unique motifs stamped on the pills linked them back to Scotland.

A number of WhatsApp messages were also found suggesting the defendant had “hands on” involvement as a “middle man”.

Paul Raudnitz QC, defending, told the court Scotland “did not play a leading role” and “had no idea of the volume or scale of the operation”.

He said Scotland “played no role in sourcing and manufacturing any of the drugs” and that the defendant’s actions “were out of character”, noting he had “no drugs offences in the past seven years”.

Detective Sergeant Kieran Curry, of the Central West Gangs Unit, said: “This operation led to a significant quantity of Class A and B drugs being taken off the streets of London. I am delighted with today’s outcome and believe that it serves as evidence of our zero tolerance approach towards drug dealing in our community.

“We will continue working to disrupt the distribution of illegal substances in our boroughs – ensuring those involved are brought to justice.”