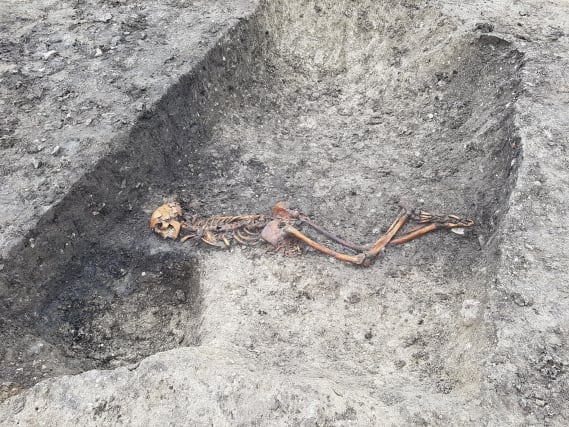 The skeleton of a man believed to have been murdered or executed during the Iron Age has been found during HS2 archaeological works.

He was buried face down with his hands tied together in a ditch at Wellwick Farm near Wendover, Buckinghamshire.

A circular monument of wooden posts resembling the layout of Wiltshire’s Stonehenge was also discovered.

Excavation work in the area has revealed human activity dating from the Neolithic to the Medieval period, a time spanning around 4,000 years.

Project archaeologist Dr Rachel Wood said: “We already knew that Buckinghamshire is rich in archaeology but discovering a site showing human activity spanning 4,000 years came as a bit of a surprise to us.

“The death of the Wellwick Farm man remains a mystery to us but there aren’t many ways you end up in a bottom of a ditch, face down, with your hands bound.

“We hope our osteologists will be able to shed more light on this potentially gruesome death.

Archaeological works are being carried out on the route of the HS2 high-speed railway.