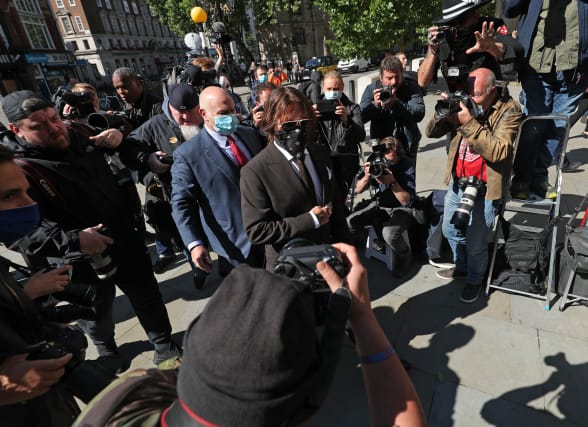 A "defecation incident" in which faeces were found in Johnny Depp and Amber Heard's bed was a "fitting end" to the couple's relationship, the Hollywood actor has said.

The star told the High Court he had been "convinced" it was either his ex-wife herself, or one of her friends who was involved in the episode.

Mr Depp has entered the witness box to give evidence for the fourth day in his libel action against The Sun newspaper over allegations he was violent to Ms Heard, 34.

The Pirates Of The Caribbean star is suing The Sun's publisher News Group Newspapers (NGN), and its executive editor Dan Wootton, over an April 2018 article which labelled him a "wife beater".

NGN relies on 14 alleged incidents of domestic violence towards Ms Heard, which Mr Depp denies, in their defence against the actor's libel claim.

On Friday, Mr Depp, 57, was questioned about Ms Heard's 30th birthday party at the Eastern Columbia Building in Los Angeles in April 2016, and the "defecation incident".

Mr Depp told the court he thought the April 2016 incident was "a fitting end to the relationship".

Earlier, Sasha Wass, lead counsel for NGN suggested Boo, one of the couple's two Yorkshire terriers, "had problems with her toilet habits", to which the actor said the dogs "were very well trained", but that "Boo was not as trained as Pistol", their other dog.

Ms Wass said to Mr Depp that "it came to your attention the following, that was the day of Amber's actual birthday, that the cleaner had found faeces in the bed".

She suggested Mr Depp was later sent photographs of the faeces, which the actor found "hilarious" and that "there were jokes like 'Amber Turd', 'Amber in the dumps' going on."

Mr Depp replied: "It was one of the most absurd, unexpected statements that I have ever witnessed in my life so, yes, initially I did laugh because it was so strange."

He told the court it was "a mystery" who defecated in the bed "and it was not left by a three or four-pound dog".

Mr Depp added: "I was convinced that it was either Ms Heard herself or one of her cohort involved in leaving human faeces on the bed."

Earlier, Ms Wass told the court Mr Depp had arrived late for Ms Heard's party after being given some "rather unfortunate news" about his financial affairs at a meeting.

The Edward Scissorhands star said he went to bed and was reading "trying to avoid any confrontation with Ms Heard".

He was asked if he was really reading a book on his wife's birthday when she had said she was upset he was late to her party.

Mr Depp replied: "I thought her behaviour regarding the subject of my tardiness to her birthday dinner, I though that it was too much... her anger, her rage... when I had been texting Ms Heard, telling her 'I am so sorry, I'm going to be late'."

Ms Wass went on to suggest Mr Depp had become angry after Ms Heard raised the issue of him being late to the party, and he got out of bed to argue with her, which the actor denied.

The barrister said Mr Depp was "very distressed about the news you had received and the last thing you wanted to be told was that you were a disappointment to your wife".

Mr Depp replied: "I believe that's the last thing any husband would want to hear."

Ms Wass went on to accuse Mr Depp of picking up a magnum bottle of champagne and throwing it at Ms Heard, which missed, with the glass smashing, which he denied.

She also alleged he grabbed Ms Heard by her hair and pushed her onto the bed" adding "when she tried to leave, you blocked the bedroom door and you tried to grab her hair".

The barrister suggested Mr Depp then "pushed her to the ground" and "bumped her chest" before leaving the apartment.

Mr Depp denied that he had grabbed or pushed Ms Heard and said he had texted his security team, who were outside the penthouse, and said "gotta go, got to get out of here".

Mr Depp replied: "I don't know that I did, but it is very, very possible."

The court briefing went into private on Friday to consider evidence relating to Ms Heard's allegations of sexual violence.

The exact nature of the allegations was not disclosed to the press or public and remains unknown.

The actor's case against NGN and Mr Wootton arises out of the publication of an article on The Sun's website on April 27 2018 with the headline: "Gone Potty: How can JK Rowling be 'genuinely happy' casting wife beater Johnny Depp in the new Fantastic Beasts film?"

NGN is defending the article as true and says Mr Depp was "controlling and verbally and physically abusive towards Ms Heard, particularly when he was under the influence of alcohol and/or drugs" between early 2013 and May 2016, when the couple split.