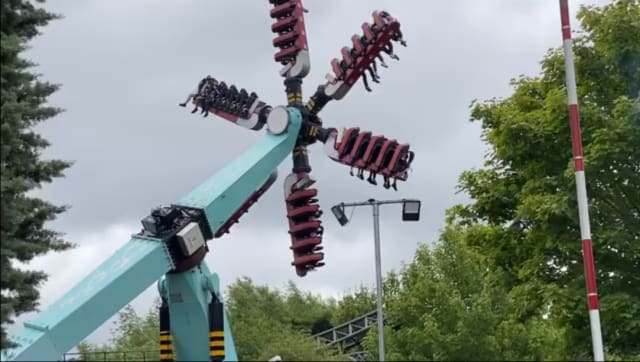 A ride at Thorpe Park experienced a stoppage on Thursday, leaving guests "dangling" for 20 minutes as the issue was resolved.

No injuries were reported after the incident, with a spokeswoman noting that Samurai was "back up and running" later on in the day.

A visitor to Thorpe Park, who did not want to be named, told the PA news agency: "One of their rides broke down leaving people dangling.

"The ride was going like normal and then suddenly stopped mid-air. They announced that ride was broken. The queue was evacuated and they were stuck up in the air for around 30 minutes."

A spokeswoman for Thorpe Park said that the ride had come to a stop at 11.08am, with guests allowed off the ride by 11.31am.

"The Samurai ride at Thorpe Park Resort in Surrey experienced a technical problem," she said.

"This resulted in the automatic fail-safe system bringing the ride to a controlled stop. Experienced resort staff were on site immediately to assist with guest care.

"The health and safety of our guests is our number one priority. No guests were injured.

"We are very sorry for any discomfort our guests experienced during the delay due to the stoppage."

Thorpe Park opened its doors on Saturday after closing in March due to the UK-wide lockdown efforts to curb the spread of coronavirus.

The park's phased reopening includes the need for guests to pre-book tickets and bring a mask to the park.

"Most people are listening to social distancing guidelines," the visitor added.