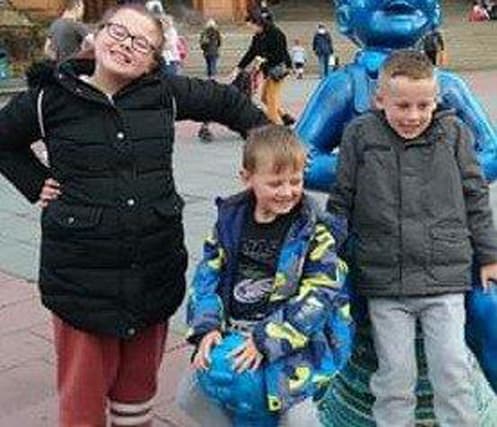 Friends and local residents have lined the streets to pay their respects as the funeral procession for three siblings who died following a fire at their flat passed through the town.

Fiona Gibson, 12, and brothers Alexander, eight, and Philip, five, were taken to the Queen Elizabeth University Hospital in Glasgow after the blaze at the property in Renfrew Road, Paisley, on June 19.

They died a short time after being admitted.

A family friend said last week that the children’s mother Julie had been discharged from hospital and had begun the “very heartbreaking process” of laying her “three babies” to rest.

People were asked to wear colourful clothing and to clap softly as the funeral procession passed through the Gallowhill area of the Renfrewshire town on Thursday.

The first of the three hearses carried a pink coffin while the other two carried blue ones, and the third hearse also had a decoration in the shape of a rainbow.

The cortege passed close to St Catherine’s Primary School where the two younger boys were pupils.

Head teacher Emma Henry previously said: “We are truly saddened by the loss of Alexander and Philip.

“They were both full of energy and such an important part of our school.

“Both boys loved the outdoors and frequently talked about their regular visits to the park.

“They never ceased to make us smile. Our thoughts and prayers are with the family at this time.”

After leaving the Gallowhill area, the cortege made its way to Hawkhead Cemetery.

Fiona was a pupil at Mary Russell School in Paisley, where head teacher Julie McCallum, said: “Words cannot express the sadness we are feeling.

“Fiona was a wee shining light in our Mary Russell family and to lose three young lives in this way is devastating for everyone.

“Our thoughts and prayers are with the family and all affected by this tragedy at this very sad time.”

A JustGiving page set up by a family friend and posted on the Facebook page of the children’s father Alex Gibson has raised more than £29,000, well beyond the £10,000 target.

In a message on the page last week, its founder Esther Chalk wrote: “Julie (mother) is now out of hospital and has started the very heartbreaking process to bury her 3 Babies.

“Please keep both Alex and Julie in your thoughts and prayers, and they want every single person to know how grateful they are for everything and every donation received.”

Police Scotland have said the fire is not being treated as suspicious.