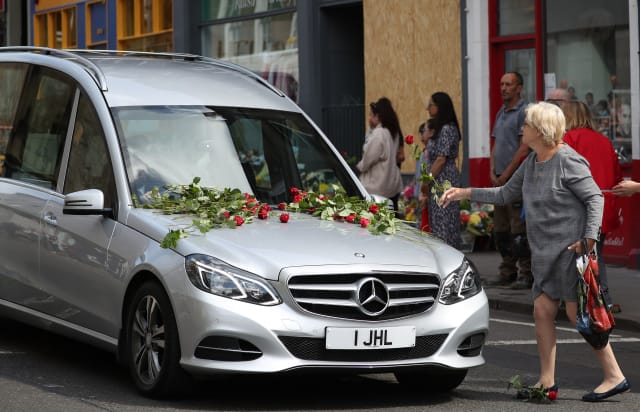 Hundreds of mourners have placed roses on a hearse carrying a three-year-old boy who was killed in a car crash.

Xander Irvine was walking along Morningside Road in Edinburgh with his mother Victoria, 37, when he was hit by a car on Tuesday June 30.

The red Kia mounted the pavement and crashed into a shop front at around 2.30pm.

Xander was taken to hospital but died from his injuries.

His mother was also injured but has since been released from hospital.

Residents and business owners lined the street on Thursday morning to pay their respects as the funeral procession drove by.

Local florist Quate & Co handed out 400 roses to those who had gathered so they could be placed on the hearse as it passed.

In a statement previously released by the family, they said: “Xander Paul Thomas Irvine, three years old, was out for a walk in Morningside with his mother on Tuesday afternoon when a tragic accident occurred.

“Xander was a very happy, bubbly, intelligent little boy who was very dearly loved by his parents Victoria and Paul.

“Xander was a real chatterbox who just loved books, playing with all sorts of vehicles and his Lego.

“He really enjoyed life and he enriched the lives of everyone he met.

“Victoria and Paul are devastated and feel as if their hearts have been ripped out.

“Xander will be so very sorely missed by them both and all his family and friends in Scotland and Northern Ireland.

“What will we do without you, Xander?”

Police said the 91-year-old woman driving the car was not injured.

A fundraiser was launched to help the family, and more than £25,000 had been donated by Thursday.