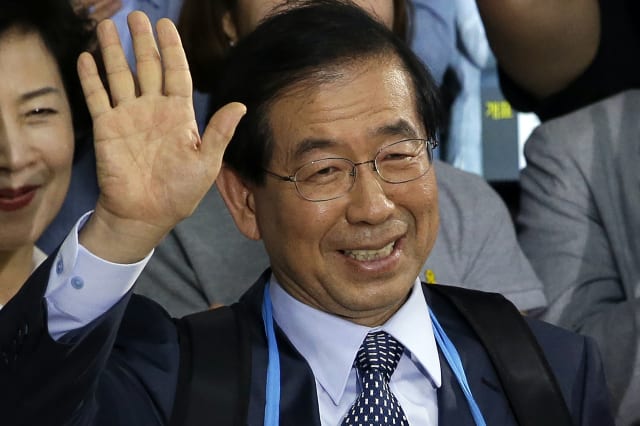 The missing mayor of South Korea's capital, who was reportedly embroiled in sexual harassment allegations, has been found dead.

Park Won-soon's body was discovered after he sent his daughter a will-like message, police said.

The 64-year-old's remains were located near a restaurant in wooded hills in northern Seoul, more than seven hours after the search was launched.

Mr Park's daughter called police on Thursday afternoon and said her father had given her "a will-like" verbal message in the morning before leaving home.

She did not explain the contents of the message, an officer at the Seoul Metropolitan Police Agency said.

Police said they mobilised about 600 police and fire officers, drones and tracking dogs to search for Mr Park in the hills, where his mobile phone signal was last detected.

They said the phone was turned off when they tried to call him.

His daughter called police after she could not reach her father on the phone, the Seoul police officer said.

Kim Ji-hyeong, a Seoul Metropolitan Government official, said Mr Park did not show up for work on Thursday for unspecified reasons and had cancelled all of his schedule, including a meeting with a presidential official at his Seoul City Hall office.

The Seoul-based SBS television network reported one of Mr Park's secretaries lodged a complaint with police on Wednesday night over alleged sexual harassment, such as unwanted physical contact, that began in 2017.

The SBS report said the secretary told police investigators that an unspecified number of other female employees at Seoul City Hall had suffered similar sexual harassment by Mr Park.

Both the Seoul Metropolitan Police Agency and Mr Park's office said they could not confirm the reports.

Police officer Lee Byeong-seok told reporters Mr Park was last identified by a security camera at 10.53am local time at the entrance to the hills, more than six hours before his daughter called police to report him missing.

He became the city's first mayor to be voted into a third term in June last year.

A member of president Moon Jae-in's Democratic Party, he has been considered a potential presidential candidate in the 2022 elections.

As a lawyer, he was credited with winning the country's first sexual harassment conviction.