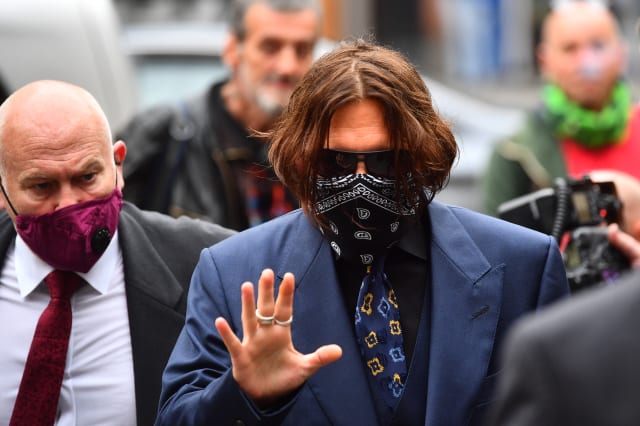 Johnny Depp used a severed finger dipped in paint to scrawl graffiti on a mirror and walls following an explosive row with ex-wife Amber Heard, the High Court has been told.

The Hollywood actor has been accused of assaulting Ms Heard, 34, and "completely destroying" a house in Australia in a drink and drug-fuelled rage.

The allegations were put to Mr Depp on his third day on the witness stand in his libel action against The Sun newspaper.

Mr Depp said he "vehemently denied" subjecting Ms Heard to a "three-day ordeal of assaults" during the Australia trip, saying it was "pedestrian fiction".

The 57-year-old is suing the tabloid's publisher News Group Newspapers (NGN) and its executive editor Dan Wootton over an April 2018 article which labelled him a "wife beater".

Mr Depp's lawyers say the article made "defamatory allegations of the utmost seriousness", accusing him of committing serious assaults on Ms Heard and "inflicting such serious injuries that she feared for her life".

The incident in Australia is one of 14 alleged incidents of domestic violence, all denied by Mr Depp, relied on by NGN in their defence against the actor's libel claim.

Sasha Wass QC, lead counsel for NGN, said Ms Heard alleges there was a "three-day ordeal of assaults, during which you were under the influence of drugs including MDMA and you were violent".

Mr Depp said: "I vehemently deny it and would go so far as to say it is pedestrian fiction."

The barrister put it to Mr Depp, who was in Australia filming Pirates Of The Caribbean, that he was "drinking regularly" and "taking controlled drugs" at the time, to which he said: "I respectfully disagree with your assumptions."

Ms Wass later said: "I suggest that you were angry, you were in a house that you had exclusive occupancy of with Ms Heard, a house with a large amount of alcohol in it, and what you described as your ugliness came to the fore very much in the three days that Ms Heard was in that house."

Mr Depp said that it was not a "three-day ordeal" and claimed there was an argument when Ms Heard "started yelling" about signing a pre-nuptial agreement.

During her cross-examination, Ms Wass put it to Mr Depp that he subjected Ms Heard to a litany of abuse, including slapping her, grabbing her by the throat, and throwing her "against a ping-pong table which collapsed", all of which the actor denied.

Mr Depp told the court that Ms Heard threw a vodka bottle at him, severing his finger, and that after this he began "what I feel was probably some species of a breakdown, a nervous breakdown or something".

Ms Wass said that on the last day the couple were in Australia, Ms Heard "came downstairs in the morning ... and the house was completely destroyed".

She said: "Everything was broken and shattered, the television, the window, there was paint everywhere and it was clear at that stage that you had very seriously damaged your finger."

In a witness statement before the court, Mr Depp said he had written on a mirror and walls "in blood and paint".

He told the court he had felt "considerable pain" from the injury, and denied that he did not know what he was doing at this point.

The actor later said that when he realised the top of his finger was missing "and pouring blood profusely and the bone was sticking out, I believe that I went into some kind of breakdown".

He added: "I was at the end. I couldn't live, didn't want to live at that time."

Earlier, Johnny Depp accused Ms Heard of telling "porky pies" about him to a psychiatrist.

The Hollywood star suggested there was a "benefit to her (Ms Heard's) motivation" to tell the medical professional that he was "threatened" by her career and that a film she made with actor James Franco led to a "binge" that put him in hospital.

The High Court has also heard details of medical notes written by Mr Depp's private doctor which said the actor "romanticises the entire drug culture and has no accountability for his behaviour".

The actor's case against NGN and Mr Wootton arises out of the publication of an article on The Sun's website on April 27 2018 with the headline "Gone Potty: How can JK Rowling be 'genuinely happy' casting wife beater Johnny Depp in the new Fantastic Beasts film?".

NGN is defending the article as true and says Mr Depp was "controlling and verbally and physically abusive towards Ms Heard, particularly when he was under the influence of alcohol and/or drugs" between early 2013 and May 2016, when the couple split.

A separate libel claim brought by Mr Depp against Ms Heard in the US, over a December 2018 column in the Washington Post, which said the actress received "the full force of our culture's wrath for women who speak out", but did not mention Mr Depp by name, is due to begin in January 2021.