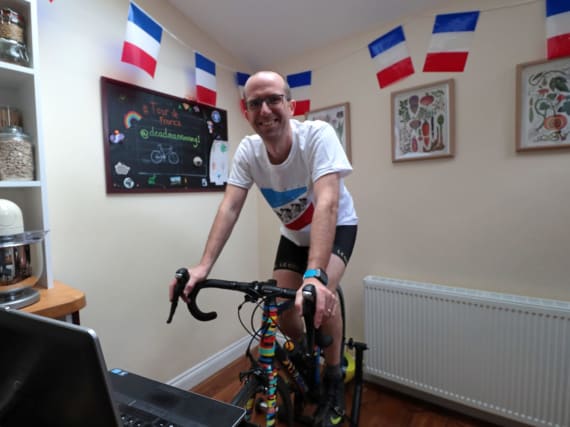 A man with stage four bowel cancer has been using his time shielding to complete a locked-down Tour de France to raise money for the foundation behind his drug trial.

Keith Farquharson from Heaton in Newcastle has been in quarantine for four months to protect himself from the virus.

The 46-year-old software developer is currently receiving cancer treatment at the Sir Bobby Robson Cancer Trials Research Centre and set himself the challenge of cycling 2,082 miles (3,350km) to raise money for the foundation.

He is one of around 80 patients globally on a treatment trial for Cetrelimab, which he began taking in February 2018 at the centre.

He was first diagnosed in May 2017 and after six months of chemotherapy was told that half of the people with his prognosis die within 12 months.

He told the PA news agency: “I am the only person in Newcastle getting this treatment, and I think one of only two in the UK.

“To have this facility on my doorstep in the North East of England is incredible and I am so grateful that they exist and have kept me alive for so long.

“One of the reasons I have done this is to give something back to them.”

This is not the first time Mr Farquharson has taken on a physical challenge, having signed up for the Great North run two years after a triple cancer diagnosis hit his family.

Within the space of five months, he, his wife Amber, and his father were all diagnosed with cancer. His wife is now in remission but his father died in March last year.

Using a turbo trainer and a simulator, he has been able to convert his road bike and cycled up and down the mountains of France without having to leave his living room.

The total ascent covered by the race is the equivalent of climbing Mount Everest five times.

He has been cycling for two hours a day, tackling 50km (31 mile) stretches at a time, alongside working from home and receiving his cancer treatment.

On occasions, he has been joined by seven-year-old son Caspian.

He said: “He has been cycling bits with me, mainly downhill bits which he quite enjoys, seeing how fast he can go.”

The software developer is now on track to complete the Tour de France 2018, which he has been live-tweeting from @DeadManRunning1.

He said: “I’ve always been a fan of the Tour de France but the 2018 race is special for me.

“It was the year my wife and I were both off work with cancer and I had time to watch it all.

“It was an iconic race and my mum was Welsh, so it really meant a lot to me that Geraint Thomas won.

“This has given me something else to focus on while we’re all stuck at home and I’m raising funds so that others can benefit from research into cancer, as I have.

“It’s a really fantastic activity for me mentally as well as physically. When I’m cycling, I’m not thinking about anything else. I’m just cycling. That’s such an important escape for me just now.”