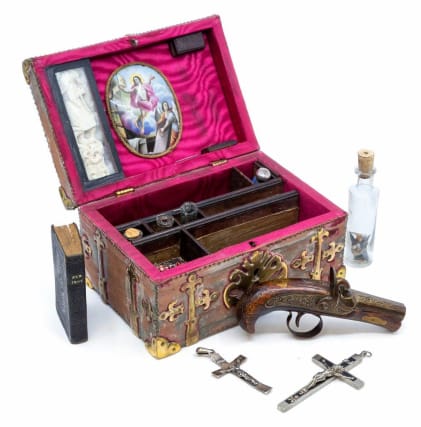 A velvet-lined box described as a “vampire-slaying kit” containing a 19th century copy of the New Testament, a pocket-sized pistol and crucifixes is going up for auction.

The unusual gothic-looking item also comes with other contents including pliers, a rosary and a bottle of shark’s teeth, and has been given an estimate of £2,000-£3,000 by valuers.

Bound in metal, the lock-box has a carved ivory wolf in robes carrying rosary beads, a cobalt-blue glass phial with a lid – the contents of which are unknown – and a pocket knife with mother-of-pearl handle and silver blade.

Within the lid is an oval enamel painting showing the resurrection of Christ.

It’s provenance is a mystery, however one clue is an 1842 copy of the New Testament, which fits within a slotted section of the box, bearing contemporary owner inscriptions for an Isabella Swarbrick.

The lot has already sparked great interest on social media according to Derbyshire-based auctioneers Hansons.

Its owner, who is from the West Midlands and did not wish to be named said, said: “I know very little of its history.

“I have had it in my own collection for three years now.

“I bought it from a large antiques fair in Newark-on-Trent.

“I loved the look of the Gothic box and, when I opened it, I just had to have it. I thought it was so interesting – a great conversation piece.”

Charles Hanson, owner of Hansons Auctioneers, said: “People are fascinated by stories of vampires, hence their continued appearance in films and on TV today.

“They have been part of popular culture for more than 200 years.

“The publication of John Polidori’s The Vampyre in 1819 had a major impact and that was followed by Bram Stoker’s 1897 classic Dracula.

“However, a belief in vampires and strange superstitions goes back even further and persists to this day.

“The task of killing a vampire was extremely serious and historical accounts suggested the need for particular methods and tools.

“Items of religious significance, such as crucifixes and Bibles, were said to repel these monsters, hence their strong presence in the kit we have found.”

The lot is due be sold in an online auction by Hansons on July 16, as part of its five-day antiques and collectors auction.