Witness to crane crash: My family are lucky to be alive 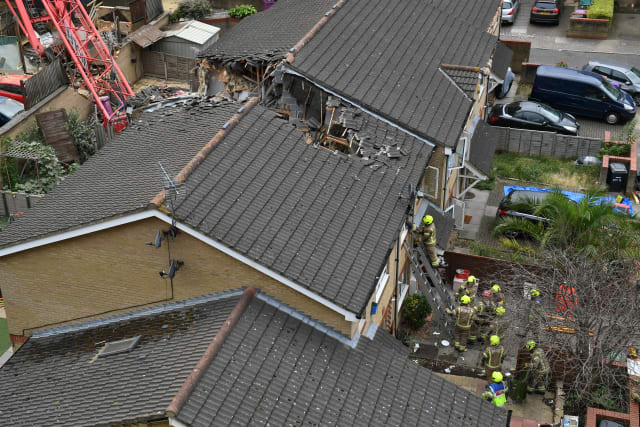 A woman whose home was damaged by the collapsing crane in east London said her family are lucky to be alive.

In a shaking voice, the woman who did not want to give her name to the PA news agency, said she felt “traumatised” after the crane fell in Bow on Wednesday afternoon, killing one person.

She said her home is next door to the one which felt the full impact of the crash, and said the collapse sounded “like an earthquake”.

Reflecting on what happened, the woman said: “I came out of the bathroom and if I had come out a second later, the attic door which is above could have fallen on me and that would have knocked me out.

“The way that everything fell – if my brother or sister had been in their rooms which is where it hit directly, I just cannot bear to think about it.

“If you could see the state of our garden.

“My dad was walking back into the house to tell everyone ‘move, there is a crane coming down’.

“If anyone had been inside the two rooms there, they would have been completely crushed.

“It is just lucky that one of my siblings was at work and the other one was downstairs.

“They would have been completely crushed.

“It is all just so upsetting.”

Describing the devastation left in her home after the collapse, she said: “There was just rubble and stuff in the doorway.

“There was smoke and just bits and bobs around.

“My mum was shouting for me because she thought it had hit me.

“I was screaming back.

“I then realised my brother was downstairs and I need to grab whatever I can and just go.

“I am not sure how I managed to run downstairs because there was stuff everywhere.

“All the smoke alarms were going off.

“I went to the sitting room.

“It sounded to me like an earthquake or almost like a stone that someone had chucked into our home.

“We are all just so lucky to be alive – that is all I can really say.”

She was speaking from beside the police cordon, which had been thrown up inside the densely-packed inner city patch of east London, but it was still in the shadow of a large crane that stood overhead.

Pointing to the crane, she said: “Why is that up there, fully loaded and just waiting to hurt somebody?

“Have you heard the wind and felt how bad the wind has been lately?

“They keep on building in crowded areas where people walk and live daily.

“What did they think was going to happen?”

Residents have been evacuated to a nearby school and emergency services work within the cordon at the scene.

She added: “How can people go back in their homes and not feel traumatised?

“I can feel it all over my body right now.

“I can feel that it is not right.