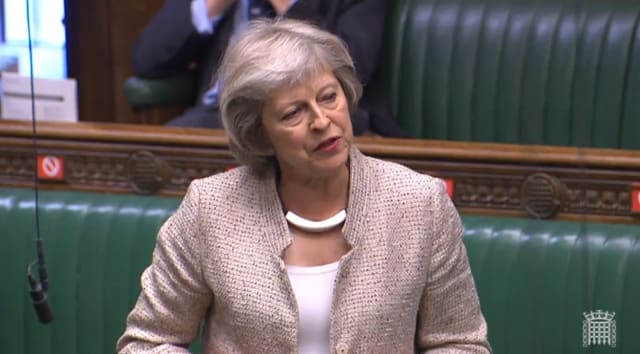 Theresa May is to seek a law change to ensure killer drivers face life behind bars.

The former prime minister wants to introduce the Death By Dangerous Driving (Sentencing) Bill to the House of Commons.

This would amend existing 1988 legislation to increase the maximum sentence for causing death by dangerous driving from 14 years to life imprisonment.

The issue was reviewed and consulted upon by Mrs May’s government.

It led to a commitment in 2017 that drivers who caused death by speeding, racing, or using a mobile phone would face the prospect of a life sentence.

Offenders who caused death by careless driving while under the influence of drink or drugs would have also faced a life sentence under the plan.

But the commitment was not acted upon and earlier this year Mrs May pressed Boris Johnson’s Government to follow through on the policy.

The Conservative MP for Maidenhead told the Commons in January: “One of the areas of sentencing policy that has already been reviewed and consulted on is the whole question of death by dangerous driving, particularly when drugs are involved, such as in the tragic case of my constituent Bryony Hollands.

Justice Secretary Robert Buckland replied: “I want to get on with it. The commitment remains absolutely crystal clear. I very much hope that we can have a vehicle to do that.

“I am going to be doing a sentencing Bill this year – that could be one vehicle. I want to get on with this as soon as possible. We will have the time and the support of the Government to change the law in the right direction.”

Mrs May will use the 10-minute rule motion procedure to try and introduce her Bill, which is scheduled to be heard on July 21.

If successful on that day, the Bill will have several stages to clear before it becomes law but could be aided by Government backing.