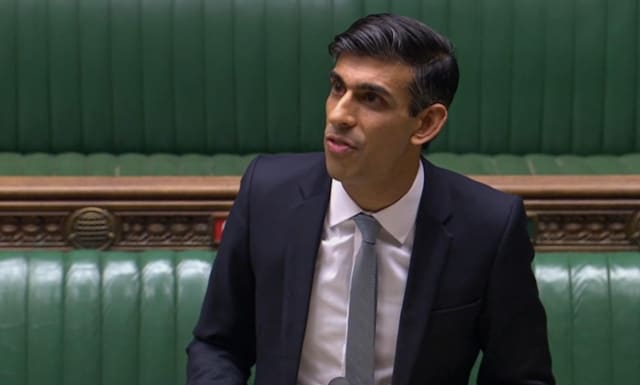 Firms which have furloughed staff will be given a £1,000 bonus to keep workers in jobs, diners will get a discount to support pubs and restaurants and stamp duty will be cut under plans to protect the economy from the coronavirus recession.

Chancellor Rishi Sunak said the jobs retention bonus could cost up to £9 billion if all furloughed workers are retained.

He unveiled the measure as part of an emergency package of support to help keep people in work as the coronavirus economic crisis hits.

He warned that “hardship lies ahead”, but insisted that no-one will be left “without hope”.

Unveiling announcements in a “plan for jobs” which could cost up to £30 billion, Mr Sunak also:

– Confirmed plans to abolish stamp duty on properties up to £500,000 in England and Northern Ireland.

– Announced an “eat out to help out” plan for dining out in August to boost the hospitality sector, with a 50% discount per head from Monday to Wednesday up to a maximum discount of £10 per diner.

– Slashed VAT on food, accommodation and attractions from 20% to 5%, a tax cut worth up to £4 billion.

The furlough scheme winds down in October, and Mr Sunak is acting in an attempt to avoid widespread redundancies as state support is withdrawn.

“While we can’t protect every job, one of the most important things we can do to prevent unemployment is to get as many people as possible from furlough back to their jobs,” he said.

Under the Jobs Retention Bonus, firms will be paid £1,000 for each employee they bring back from furlough and continuously employ through to January on an average of at least £520 a month.

“We’ll pay the bonus for all furloughed employees,” he said.

“So if employers bring back all nine million people who have been on furlough, this would be a £9 billion policy to retain people in work.

The Chancellor, in what amounts to a mini-budget, told MPs that the Government will do “all we can” to keep people in work.

Addressing MPs, Mr Sunak said his “plan for jobs” would help protect livelihoods after the economy contracted by 25% in just two months.

He said: “We have taken decisive action to protect our economy.

“But people are anxious about losing their jobs, about unemployment rising. We’re not just going to accept this.

“People need to know we will do all we can to give everyone the opportunity of good and secure work.

“People need to know that although hardship lies ahead, no-one will be left without hope.”

Measures announced by Mr Sunak include:

– A £2 billion scheme of taxpayer-funded work placements for 16-to-24-year-olds on Universal Credit and at risk of long-term unemployment.

– A £3 billion green package, with grants for homeowners and public buildings to improve energy efficiency.

The Chancellor’s statement comes after warnings from the Organisation for Economic Co-operation and Development (OECD) that the UK’s unemployment rate could soar to 14.8%, with job losses comparable to the 1930s.