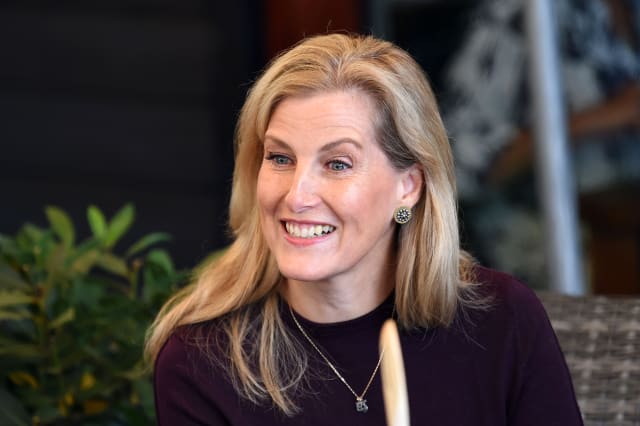 The Countess of Wessex opted out of having a drink when she visited a country pub to learn how the business is recovering from the lockdown – as she was driving.

When Sophie joined fellow members of the Bagshot Women's Institute (WI) in the garden of the Half Moon in Windlesham, Surrey, she looked enviably at Ann Bull, 81, enjoying a gin and tonic with her lunch.

The countess, 55, said: "I'm driving – otherwise I would have been joining you. On local engagements I drive myself most of the time."

She had arrived at the pub near her Bagshot Park home in a Jaguar saloon and, like the Princess Royal, sometimes prefers to get behind the wheel when the opportunity arises.

WI member Sue Surman, 74, said she took one look at the orange juice one of them was drinking and said: "I would have some champagne in that."

Sophie has spent much of the lockdown volunteering for a range of good causes from Helpforce, a charity providing daily meals for NHS workers, to the Lighthouse Woking Foodbank and Nourish our Nurses.

The conversation with the WI group turned to the countess being asked to pose for pictures during her charity work, while wearing a face mask.

She said: "If you stand with somebody and they say 'Can I take a picture?', you stand and smile, and of course you think, 'I'm smiling, but what's the point?', but you can see it still, in the eyes. It takes a little bit of getting used to.

"I don't know what ones I prefer. You've got slightly more surgical ones, and I've got some handmade ones as well. Some of them are thicker than others. You suddenly realise the thick ones are quite warm."

Sophie described some of the conversations she has had with her father about technology, explaining to him how gadgets need to be treated with respect and telling him: "Don't stab it! Just touch it. You don't need to stab it."

She was, she said, constantly on Zoom, adding: "I just wish I had bought shares in it."

The countess found that being so close to home meant she bumped into some familiar faces.

At one table she met Sam McLaughlin, 44, pausing for a moment before she realised they use the same gym.

"I'm not used to seeing you not in Lycra!" Sophie laughed.

The other one was harder to work out. It was not until Richard Tear, 74, introduced himself that she remembered that he had been a client of hers in the days when she worked in public relations and he was chief executive of the caterers Searcy's, whose London venue was 30 Pavilion Road in Knightsbridge.

Afterwards Mr Tear said: "The company was obviously in need of a good PR lady, and she was kind enough to take us on for a short period of time before she got married. She was absolutely brilliant. She still is.

"Her charm has not diminished. And she does not look a day older, unlike me."

During her visit to the Half Moon, the countess met three generations of the Sturt family who own the pub, which dates back to the 17th century and was originally a coaching inn and general stores for the Duke of Connaught.

When the countess came across the family's 15-week-old cocker spaniel puppy, Hendrix, she told the pet: "You are gorgeous."

She added: "Can I just say you are really lucky you are on the end of a lead, otherwise I might take you home."

Conrad Sturt, whose mother Helga bought the pub in 1971, said that when they were forced to close it was "like a stab to the heart".

The pub opened at the weekend and he added: "The support of our locals, and our community, has been exceptional. We managed to do a takeaway and a collection service which has kept us going."