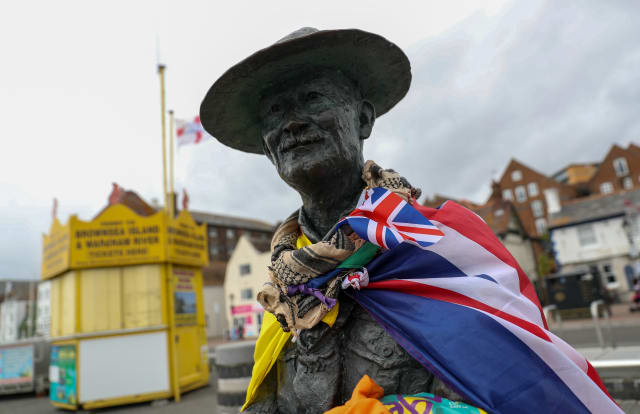 A statue of Robert Baden-Powell which was boarded up after it was put on a target list has had the protective casing removed.

Bournemouth, Christchurch and Poole Council had announced in June that the statue of the founder of the Scout Movement in Poole Quay, Dorset, would be temporarily taken down.

Those campaigning for the monument to be removed highlighted Baden-Powell’s associations with the Nazis and the Hitler Youth programme, as well as his actions in the military.

But the removal was delayed after a crowd of people, some wearing Scout uniforms, gathered around the statue and vowed to protect it.

More than 36,000 people also signed a petition calling for the statue to remain in place.

The local authority instead but protective boards around it as it was felt that removing the sculpture would damage it but these have now also been removed.

Councillor Vikki Slade, leader of BCP Council, said: “The initial decision to remove the statue was based upon the risk to public safety, and to the statue itself and was only ever intended as a temporary measure.

“Following the local concerns and an assessment that removal may damage the structure we retained the statue in place on the quay.

“Our advice is that the risk is now minimal and we have decided to remove the protective hoarding.

“We are actively working with the Scout Association to consider how best to reflect the wider aspects of the life of Lord Baden-Powell but do intend to retain it in its place overlooking Brownsea Island to reflect the strong links with Scouting and the positive impact on the lives of children all over the world.”

The World Organisation Of The Scout Movement (WOSM) said Baden-Powell, who was born in 1857, had lived “in a different era with different realities”.

It said the movement he set up more than 113 years ago now has 54 million scouts in 224 countries and territories.

“Scouting offers an inclusive environment to bring young people of all races, cultures and religions together, and creates opportunities for dialogue about how to promote peace, justice and equality,” the WOSM said.

“The movement that was founded in 1907 on Brownsea Island stands strong in its promotion of diversity and inclusion which are cornerstones of scouting’s values, while denouncing all forms of racism, discrimination, inequality and injustice.”

It said scouts across the world attached “historical value and symbolism” to the birthplace of the movement.

Chief Scout Bear Grylls also said that the Scout movement should acknowledge the founder’s failings and added: “We also recognise that Baden-Powell is part of our history, and history is nothing if we do not learn from it.”