One dead after crane collapses on houses in east London 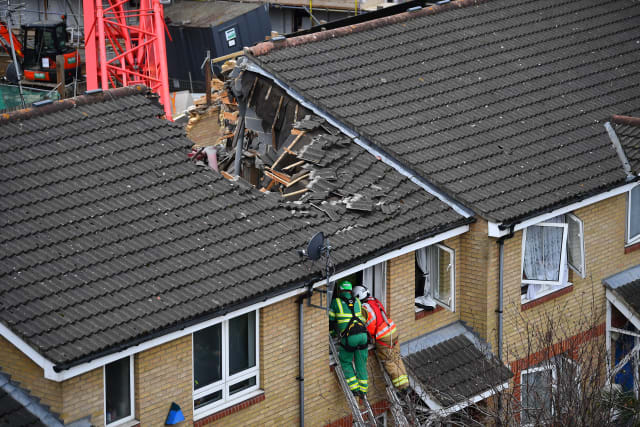 One person has died after a crane fell onto houses in east London.

The crane collapsed on a site where flats were being constructed, and crashed onto two adjacent terrace houses on Compton Close, Bow, on Wednesday afternoon, London Fire Brigade (LFB) said.

A video posted on Twitter showed a terraced house with part of the roof caved in, and emergency services said “a complex rescue operation” was under way.

A spokeswoman for LAS said: “We treated four people at the scene. We treated two of these patients for head injuries and took them to hospital and we assessed the other two patients at the scene.

“Sadly, despite the efforts of emergency services, a fifth person was found and died at the scene.”

Before the death was confirmed, LFB assistant commissioner Graham Ellis said: “Our urban search and rescue crews are undertaking a complex rescue operation and using specialist equipment to search the properties.

“There are reports of at least one person that may be missing and unaccounted for in the houses.”

The crane that collapsed was being used by Swan Housing Association and NU living.

“Our thoughts are with those affected and their families at this difficult time.

“We would like to thank the emergency services for their swift and dedicated response and those who are supporting residents who have had to leave their homes as a safety precaution.

“Our staff are on site to provide support to the emergency response and the investigation.”

Work on the Watts Grove site began in 2018 where the one, two and three-bed shared ownership apartments are replacing an electrical substation building, according to the NU living website.

Neil Marney, chief executive of Marney Construction, said his company was working on another site and he could see the crane being erected on Tuesday.

He told the PA news agency: “My project manager on the site called me immediately and said the crane you were looking at yesterday being erected has just collapsed.

“So all I could see yesterday was the mast and the cab was on, and then I believe they started to add sections of the boom.”

The crane that collapsed was not one of Marney Construction’s cranes nor was it a crane on one of its sites.

The Metropolitan Police sent officers to the scene after they were called at around 2.39pm on Wednesday to Gale Street to a report of a crane that had collapsed into a residential property and a building site.

Unite national officer Jerry Swain said there must be “an urgent, full and complete investigation into the circumstances that led to this accident”.

He added: “The preliminary findings of which must be released in weeks, rather than months or years, in order to ensure that similar accidents are avoided in the future.”