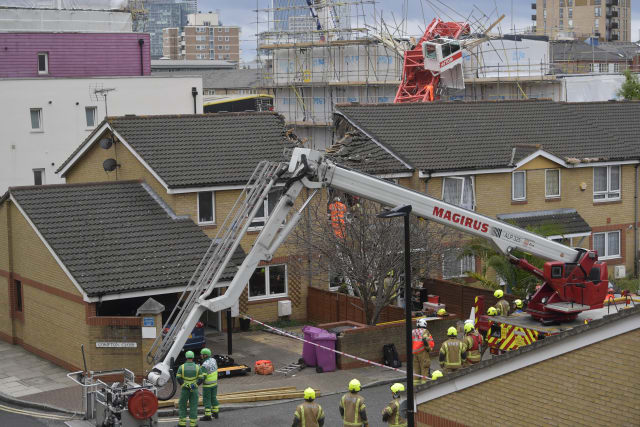 An elderly woman was rescued by locals from a house hit by the collapsing crane in east London, according to an onlooker.

Sahana Begum, who lives a few streets away, rushed outside when she hard the crash, and watched as a “shivering” and “shaking” woman was led to safety.

Ms Begum said she saw an old woman who was in the house where the roof had been hit being rescued from one of the top floors by two men with ladders.

She told the PA news agency: “The first thing I noticed was that my flooring in the kitchen had a vibration.

“It was very hard and strong.

“I actually thought that something had exploded from underground.

“The flooring was shaking and it felt like an accident happened somewhere that caused that loud noise.”

Ms Begum said she looked across Watts Grove and someone told her that a crane had fallen.

“I quickly ran and I could see the crane was on the roof and there was damage there.

“There was an old woman on her attic window.

“She was panicking so badly, you could see she was shivering,” she said.

Ms Begum said she saw an old woman at her window and could see that the woman’s son was calling at her from the ground to try and come down.

“I saw someone yelling that a crane had fallen but then I could also hear someone saying ‘help, help, help’,” she said.

At this point a few of the local people from the community tried to help her come down, including two men with ladders.

Ms Begum said: “As she was coming down the ladder you could see that she was shivering.

“She was shivering so much that she could have fallen over because she looked like she was going to miss her step.”

She said she noticed that the woman was barefoot and a man gave her a pair of sandals.

“She was really shaking,” Ms Begum said, adding that at this point police arrived and told people to move back.

Emergency services confirmed one woman died at the scene and four people were treated by London Ambulance Service.